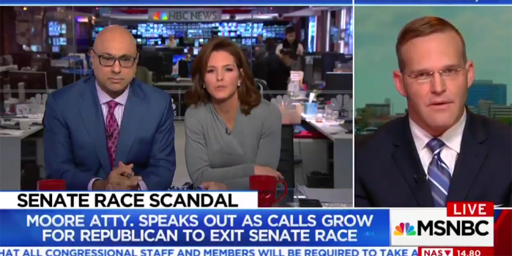 Appearing on MSNBC’s “Velshi & Ruhle” this morning, Moore’s lawyer Trenton Garmon tried to defend his client from allegations of sexual misconduct with young girls by bringing up the “background” of Ali Velshi.

Things went off the rails as Ruhle asked, “Why would [Moore] he need permission from any of these girls’ mothers if they weren’t underage?”

“That’s a good question. Culturally speaking, I would say there’s differences. I looked up Ali’s background there,” said Garmon. “Wow. That’s awesome, that you have got such a diverse background. It was cool to read through that.”

The two hosts were obviously perplexed by the odd segue.

“What does Ali’s background have to do with dating a 14-year-old?” Ruhle inquired.

Garmon never really got to any kind of salient point, but for the record: Velshi was born in Nairobi, Kenya, and raised in Toronto, Canada.