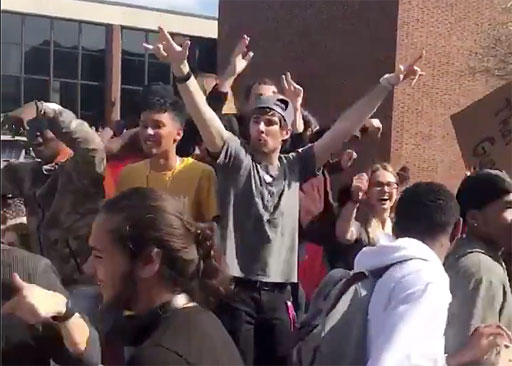 The students at Rowan University in Glassboro, New Jersey, were not having it when demonstrators showed up on their campus holding anti-LGBTQ, anti-women and anti-Muslim signs. 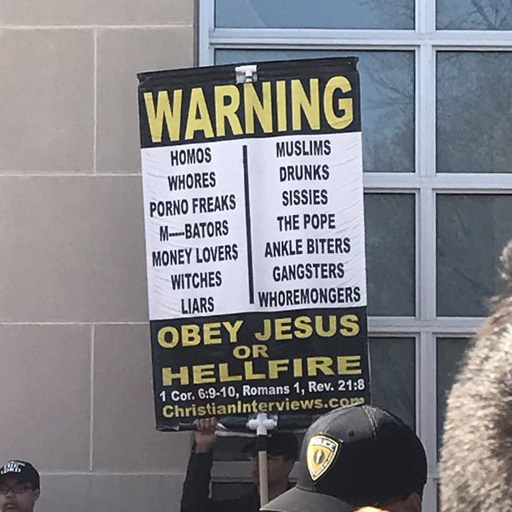 At the time, a social media post went out among students which claimed the demonstrators make their appearances on college campuses around the country in an attempt to make money.

The social media message implored the students not to engage:

“Dude so just so you know the thing happening is this group of guys who travel across the country to public college campuses and yell controversial things with the signs that they have, they do this to make money by hoping that students will get riled up and physically attack them, and then they can sue the students or even the school. They can also make money if the campus police or Glassboro police kick them off the campus; because this is censorship of freedom of speech of the first amendment, they can sue the school for a lot of [$$$]. They are con artists and scammers, don’t give them the time of day and spread this message.”

Note: There hasn’t been any evidence that confirms the anti-LGBTQ demonstrators were looking to have their appearance escalate to violence for financial gain.

It wasn’t long before hundreds of students showed up with their own signs and Pride flags forming their own, largely peaceful, protest.

One student, Elijah Olumakin, brought a speaker and music to try and distract from the demonstrators.

“I felt as though, to protest the poisonous words they’re trying to infect our minds with, we need to infect the heart with positive messages,” Olumakin told The Whit. “Whether you’re black, white, Spanish, Indian, broke, poor, gay, straight or non-binary, you love good music.”

The music led to dancing, and pretty soon the students turned the incident into a big party drowning out the hate speech.

Student government president Rbrey Singleton got on the mic at one point to congratulate the students for standing up to hate speech.

“I am so proud of everybody – we are stronger together,” Singleton told his peers. “We came out here, we stood up to hate. We’re going to keep turning our backs to hate.”

Later, in a message to the university community via email, Singleton praised the students writing, “You continue to amaze me every day by your strength and resilience.”

“We’ve been standing in the face of hate today, and many in our community have been standing against hate their entire lives,” he continued. “Let’s be bigger and turn our backs on hate. If we don’t give prejudice and bigotry our attention or power, it WILL leave. Let’s continue to spread love, inclusivity and pride everywhere we go, on and off campus.”

A message from SGA President in response to the protest on campus today. (@RowanSGA) pic.twitter.com/lh3di3zW7o

Rowan University President Ali Houshmand issued a statement emphasizing that, while freedom of expression is allowed at all times, hate speech has no place on campus.

“Rowan is obligated as a public institution to allow freedom of expression, but we do not endorse or condone hate speech in any form,” wrote Houshmand. “Rowan University is committed to providing a safe and inclusive environment for all members of the community and rejects the abhorrent sentiments expressed by the protesters.”

A message from President Houshmand. pic.twitter.com/SKY63IBzVb

According to the local ABC News affiliate, two students were arrested for throwing soda at the haters.