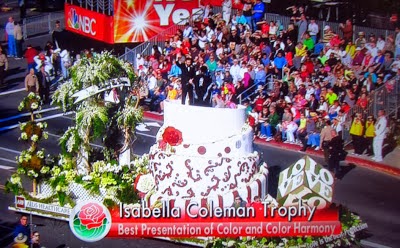 Danny Leclair, 45, and Aubrey Loots, 42, a gay Los Angeles couple of 12 years, were married atop a float in Pasadena’s Tournament of Roses Parade today sponsored by the AIDS Healthcare Foundation and intended to mark the first New Year’s Day that same-sex marriage is legal in California and the role that marriage can play in helping to reduce new HIV infections among gay men, according to an AHF official.

Despite anti-gay protests and threats of “boycotts” of the this year’s Parade, the annual event happened splendidly. As a matter of fact, the AHF float won the award for “Color and Color Harmony.”

During the 30 seconds that the float was onscreen during NBC’s coverage, the two grooms atop the wedding cake smiled, waved and did all those things you do when you are featured in a nationally televised parade.  From the look of it, the couple seemed to have a great time.

Parade host Al Roker: “A sincere shout-out to the newlyweds and the happy couples on the float.”

You will note, haters, that the sky has not fallen…