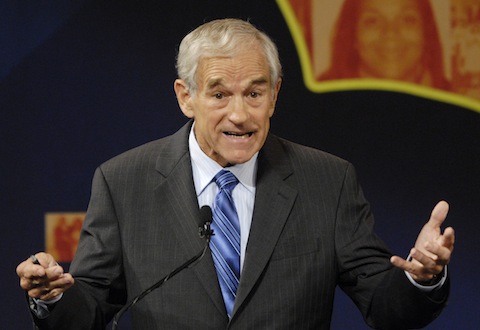 From the NY Times: Emerging as a real Republican contender in Iowa, Representative Ron Paul of Texas is receiving new focus for decades-old unbylined columns in his political newsletters that included racist, anti-gay and anti-Israel passages that he has since disavowed.

A 1992 passage from the Ron Paul Political Report about the Los Angeles riots read, “Order was only restored in L.A. when it came time for the blacks to pick up their welfare checks.”

A passage in another newsletter asserted that people with AIDS should not be allowed to eat in restaurants because “AIDS can be transmitted by saliva.”

In 1990 one of his publications criticized Ronald Reagan for having gone along with the creation of the federal holiday honoring the Rev. Dr. Martin Luther King Jr., which it called “Hate Whitey Day.”

The passages were plucked from a variety of newsletters that Mr. Paul’s consulting business published during his years out of Congress, all of them featuring his name: Ron Paul Political Report, Ron Paul’s Freedom Report, Ron Paul Survival Report and Ron Paul Investment Letter.

Mr. Paul did not respond to an interview request, but repudiated the writings in 2008. Likening himself to a major news publisher, he said he did not vet every article that was featured in his newsletters. “I absolutely, honestly do not know who wrote those things,” Mr. Paul said in an interview on CNN at the time, adding that he did not monitor the publications closely because he was busy with a medical practice and “speeches around the country.”

On Monday, his deputy campaign manager, Dimitri Kesari, reiterated that Mr. Paul “did not write, edit or authorize” the language.

“He totally disavows what was said and disagrees with it totally,” Mr. Kesari said. “The only responsibility he takes is for not paying closer attention.”

Read more at the NY Times.