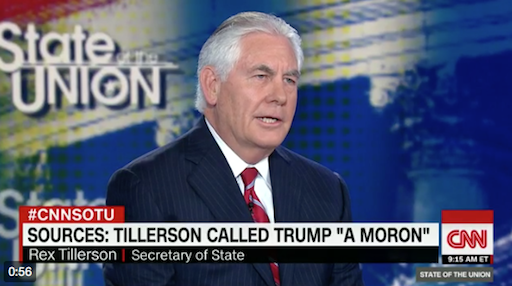 In an interview with Secretary of State Rex Tillerson this morning, CNN’s Jake Tapper tried to clarify once and for all the allegation that Tillerson had referred to Donald Trump as a “moron.”

Tillerson pointedly did not deny it saying he did not want to “dignify the question.”

“You want to make a game out of it,” said Tillerson.

The easy answer would be “no” if it were untrue.

.@jaketapper: Did you call Trump a moron?

Secretary of State Rex Tillerson on Sen. Bob Corker saying he has been “castrated”: “I checked. I’m fully intact” https://t.co/P8iV5zhi8S

.@jaketapper, point blank to Tillerson: “You still haven’t denied that you called him a moron.” Still no denial. Trump not going to be happy— Natasha Bertrand (@NatashaBertrand) October 15, 2017

Let's be clear, the only reason Tillerson refuses to answer is because he fears there's a tape and he'll be caught in a lie. #cnnsotu— A.C., Esq. (@heathclifftatum) October 15, 2017

Tillerson failed to deny he called Trump a moron for the 2nd time.