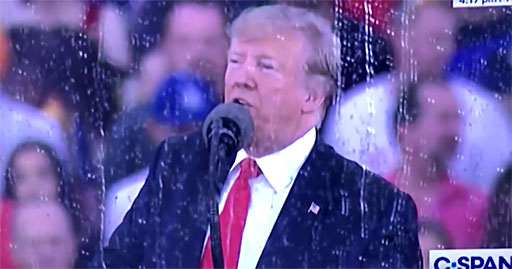 During Donald Trump’s water-logged Independence Day speech, he referenced the war of 1812 as he spoke of our army “ramming the ramparts” and “taking over the airports.”

“In June of 1775, the Continental Congress created a unified Army out of the Revolutionary Forces encamped around Boston and New York, and named after the great George Washington, commander in chief.”

“The Continental Army suffered a bitter winter of Valley Forge, found glory across the waters of the Delaware and seized victory from Cornwallis of Yorktown.”

“Our Army manned the air, it rammed the ramparts, it took over the airports, it did everything it had to do, and at Fort McHendry (Trump’s word), under the rocket’s red glare it had nothing but victory.”

“And when dawn came, their star-spangled banner waved defiant.”

Clearly, Cadet Bone Spurs is confused about the date of that first flight at Kitty Hawk.

And the battle of Fort McHenry occurred during the War of 1812, not the Revolutionary War, but, hey…

President Trump: "The Continental Army suffered a bitter winner at Valley Forge, found glory across the waters of the Delaware and seized victory from Cornwallis of Yorktown. Our Army manned the air, it ran the ramparts, it took over the airports, it did everything it had to do." pic.twitter.com/KQIGDUWDG3— The Hill (@thehill) July 5, 2019

The Twitterverse was highly amused:

Dearest Harold, Please expect a delay of about a fortnight. I’ve been detained by security forces for carrying three extra ounces of moisturizer. Again. #RevolutionaryWarAirportStories

#RevolutionaryWarAirportStories
Even back then, there were always Flight Delays on Colonial Airways, since there were no airplanes.
The good news was the Baggage Claim lines were always short. Just ask Wilbur Ross who worked there/#TrumpParade #IndependenceDay pic.twitter.com/Yqi7aofUh5

Remember Paul, 1 lantern if the British invade by land, 2 if by sea, and 3 if by Air, Ok? #RevolutionaryWarAirportStories

Dearest Martha,
Please ensure to pack our socks. We shant ride in the flying carriage whilst having our feet exposed.
George#RevolutionaryWarAirportStories pic.twitter.com/yksgtGK5A1

Dearest Martha,
I write you as I fly over the Delaware.
Our men are despondent, we are down to our last packet of peanuts and my seat back will not recline.
We will not lose hope.
George#RevolutionaryWarAirportStories

#RevolutionaryWarAirportStories
Soldier’s letter to home: “wait for me my love, the battle of Jet Blue will soon end and I will return to you post haste on standby through ATL on Delta”

Dear James,
We ran out of covfefe near a fortnight ago. We raided the planes’ hospitality carts to no avail. The Redcoats had diamond status and entered the jetway before us. I fear the Dunkin’ at Gate 35B has been overrun. We are at a disadvantage #RevolutionaryWarAirportStories

#RevolutionaryWarAirportStories
The Battle of Baggage Claim (1776)
Many Lives were lost. And Bags too. Some people are saying it was the worst massacre they had ever seen.