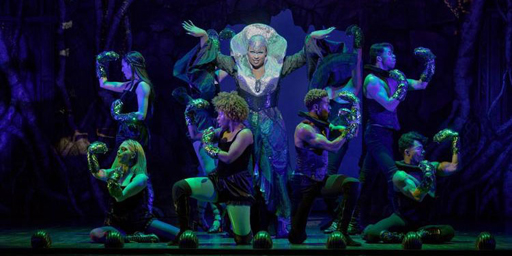 The Go-Go’s musical, Head Over Heels, opened tonight on Broadway.

What did the critics think about the new musical directed by Michael Mayer and choreographed by Spencer Liff think?

Is ‘heaven a place on Broadway?’

The New York Times: You would think that a sexually polymorphous musical that combines a Renaissance pastoral romance with the songs of the 1980s California rock group the Go-Go’s would at the very least be a hoot, a show that could get sloppy drunk on its own outrageousness. Yet “Head Over Heels,” which opened on Thursday night at the Hudson Theater, feels as timid and awkward as the new kid on the first day of school.

The New York Post: The new musical “Head Over Heels,” which opened Thursday on Broadway, takes the songs of ’80s American girl group the Go-Go’s, plops them in a British story from the 16th century and adds a bunch of modern, self-referential jokes. It’s an idea that’s so crazy, it just might work! It doesn’t. This indulgent show is wackier than it is fun, and elicits more “huh?” than “ha”. Worse, it treats the catchy pop music like a side of spinach.

Entertainment Weekly: Directed by Michael Mayer (Spring Awakening, Hedwig and the Angry Inch), the joyful production dials the camp to 11; this is a show with its tongue planted firmly in its cheek, except when it’s in someone else’s mouth.

Variety: It’s really hard to laugh when somebody’s holding a gun to your head. That’s the way this Go-Go’s feels in “Head Over Heels,” an over-written, over-designed, and generally overdone production directed by Michael Mayer. From the sets and costumes to the performance style, the basic principle seems to be: Less is boring and more is never enough. Thanks, no doubt, to the Oracle of Delphi (played here by the impishly funny Peppermint), it’s a miracle that at least some of the wit in Jeff Whitty’s original book gets through.

Deadline: For better or worse, Broadway’s Head Over Heels is stuck with being known as “the Go-Go’s musical” – better because of the good will floating on stage with all those lighter-than-air hits by Belinda Carlisle, Jane Wiedlin, et.al., worse because the hard-working new production can’t seem to keep itself from popping those effervescence tune bubbles one by one.

amNY: Um, no. Contrary to the affirmatively cheery chant of its opening number, “Head Over Heels,” a new jukebox musical on Broadway in which the hit songs of the all-female 1980s pop-punk band The Go-Go’s are inserted into a ridiculous Elizabethan-era pastiche, has not “got the beat.” That probably got lost long ago in the development of this oddball property.

Chicago Tribune: A lot of harder-edged Go-Go’s fans who find their way through the door will wonder what on earth all of these silly theater people are doing with their beloved music, not just because it feels so far removed from its original pioneering context but also because the sensibility here so doubles down on fluttery theatricality at the expense of raw, charged, visceral, feminist pop.

Hollywood Reporter: If you have trouble imagining songs like “Vacation” and “Cool Jerk” fitting into a scenario depicting a royal family’s romantic complications, you still will after seeing this relentlessly frothy musical, for which the term “check your brain at the door” could have been invented. The farcical, gender-fluid shenanigans are as campy as things get on Broadway. And that’s saying something.

There was a bit of controversy regarding the NY Times review as critic Ben Brantley was forced to issue a statement to the public and edit his review after there was a huge outcry about his use of flippant language regarding transgender and non-binary people.

In his original text, Brantley referred to the word ‘binary’ as “what’s starting to feel like the decade’s most overused word.”

His statement read: “I feel horrible about having offended transgender and nonbinary communities. I was trying to reflect the light tone of the show, as well as a plot point in which one character learns to acknowledge another not as ‘she’ but as ‘they’ – this was meant to be a reference to the character of the Oracle, not Peppermint, the person who plays the role. This unfortunately read as more flippant than I would ever have intended, especially with regard to a performance that marks a historical first. I am deeply sorry.”

What do you think, readers? Does Head Over Heels sound like a show you’d like to ‘Go-Go’ see?