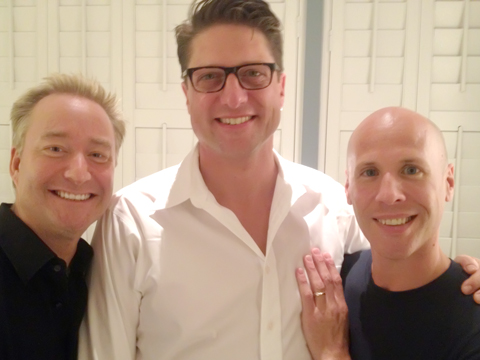 The Smith Center’s offering of the national touring company of “La Cage Aux Folles” is definitely a must-see theater event for Las Vegas.

Starring George Hamilton and Christopher Sieber with a superb score by master Broadway composer/lyricist Jerry Herman, the opening night audience was treated to a terrific evening that ranged from touching to comic hysteria.

Georges, played by Hamilton, runs a slightly tattered St. Tropez nightclub that’s a showcase for female impersonators. The ‘star’ of the showcase is his husband, Albin, the local star ‘Zaza.’

Their domestic life is upset when Georges’ son, Jean-Michel, arranges a meet-the-family dinner with his new fiancee and her parents, who are conservative, politically powerful and disapproving.

Hoping to re-write history and avoid embarrassment, Jean-Michel invites his long-absent biological mother to take the place of Albin who raised him, and ask that Albin demote to the role of “Uncle Albert.” When Jean-Michel’s mother fails to show at the last minute, Albin appears in female garb in an attempt to save the day for all. From there, hilarity and chaos becomes the order of the day.

George Hamilton performs the role of “Georges” with dignity and quiet strength as he tries to maintain balance in his family – his love for his son and his husband. His rendition of “Look Over There” is especially effective as he points out to Jean-Michel the sacrifices Albin has made over the years for his adopted son.  While his primary skill may not be as a singer, he handles his songs with confidence and grace.

However, the evening belongs to Christopher Sieber, whose “Albin/Zaza” is a star-turn that keeps the entire evening spinning. His command of comedy is masterful, and his voice is powerhouse. He knows when to use all these strengths, and when to pull them back. During “The Best Of Times” he subtly but clearly communicates a message of living life “in the now.” But it’s his powerful and moving “I Am What I Am” that brings the house down at the end of Act One.   Vocally and emotionally, he triumphantly makes a statement for himself and a community.

Praise must also be given to the fantastic men of the ensemble – “The Cagelles” – who deliver at every turn.

It also bears mentioning that Jerry Herman’s score is still as winning as the day it won the Tony Award in 1984. “La Cage” remains one of his best. On top of the artful story-telling he brings to the score, his songs leave a message true to a continuous thread of Herman’s work: that life is meant to be lived. From “Before The Parade Passes By” from HELLO, DOLLY! to “It’s Today” from MAME to “The Best Of Times” from LA CAGE, you leave the theater with a smile and a sense of looking forward.

And the show’s message of love and “non-traditional family” resonates even moreso today, in this time of marriage equality acceptance, than it did in the early 1980s.