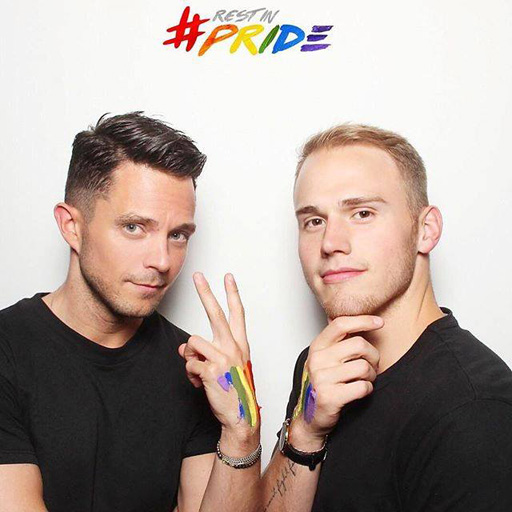 I have no words. Beyond beautiful.

With the recent tragedy of 49 innocent lives lost at the LGBT nightclub, Pulse, in Orlando, FL on June 12, 2016, the global community was left to mourn those unjustly taken by hate. As we continue to grieve in the wake of the Orlando tragedy, it is important to confront hate face-to-face and let the LGBT community and allies know they are not alone. #RestInPRIDE is one of the first call-to-action campaigns created to spread a message of love and support to people who are feeling alone or scared to live proudly.

Through sharing uplifting video messages with heart, #RestInPRIDE continues the important conversation about the victims and those affected by senseless acts of violence taking place on a daily basis. The artistic video features 49 different shared Pride memories honoring the 49 victims, including voices of various ethnicities, genders, ages, sexual orientations and people directly affected by the Orlando tragedy. The video ends with a montage of the participants putting rainbow-style “war paint” on their faces as a symbol that action needs to be taken.

A vocal track of the song “Light” from the Pulitzer Prize-winning Musical Next to Normal serves as a backdrop to the video, and was recorded by artist Brian Justin Crum. All proceeds of the track, written by Tom Kitt, will go directly to the OneOrlando Fund. “Light” can be available for purchase on iTunes.

HOW TO GET INVOLVED: We ask that you please record and upload a video of your proudest memory on the @RestInPRIDE Facebook page with #RestInPRIDE utilizing rainbow “war paint”* like those in the main video, encourage others to share their moments to make their voices heard and show the Orlando community support at OneOrlando. Hear their names, see their faces, feel their stories and know the lives of our 49 brothers and sisters were not lost in vain but live on in the collective heart of our community.