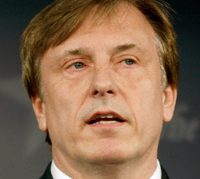 Congressman John Fleming of Louisiana introduced (and saw passage) of an amendment to the Defense Appropriations bill that allows and protects soldiers to scream and belittle gays in the military along the lines of “you will burn in hell” at gay soldiers based on “conscience, moral principles, or religious beliefs.”

It is basically a license to discriminate.

President Obama has threatened to veto the bill if the language is not changed:

“The Administration strongly objects to section 530, which would require the Armed Forces to accommodate, except in cases of military necessity, ‘actions and speech’ reflecting the ‘conscience, moral principles, or religious beliefs of the member,’ the statement read. “By limiting the discretion of commanders to address potentially problematic speech and actions within their units, this provision would have a significant adverse effect on good order, discipline, morale, and mission accomplishment.”

“President Obama is continuing his war on free speech.

“With the IRS trying to intimidate and silence conservative groups, and the Justice Department digging into the phone records of reporters, it’s no surprise that the president also wants to deny First Amendment rights to our Armed Forces. With its statement, the White House is now endorsing military reprimands of members who keep a Bible on their desk or express a religious belief. That is an outrageous position, but it’s what I’ve come to expect from an administration that is aggressively hostile toward religious beliefs that it deems to be politically incorrect.

“My amendment protects, for our men and women in uniform, a principle enshrined in our Constitution and cherished since our Founding Fathers: the free exercise of one’s religious beliefs, including expressions of one’s belief.

“It has bipartisan support and takes into account the unique context of military service, accommodating the beliefs of our service members, while not jeopardizing military necessity. We need to protect the free speech of the brave warriors who fight to safeguard our liberties, and I hope Congress will reject this blatant White House attack on religious freedom.”