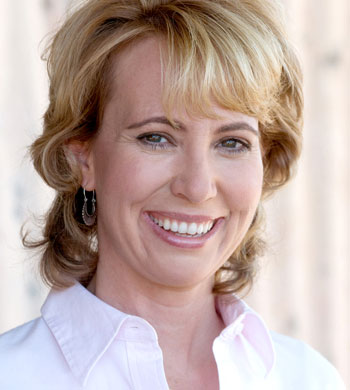 Rep. Gabrielle Giffords led a crowd in the Pledge of Allegiance, her words ringing out across a cold Tucson night in a rare public appearance Sunday evening at a candlelight vigil one year after surviving a deadly shooting that killed six.

The Democratic congresswoman stepped onstage to cheers from the crowd. Ron Barber, a staffer who was wounded in a deadly shooting one year ago, invited her to lead the audience in the pledge.

She limped to the podium, and husband Mark Kelly helped lift her left hand over her heart. After a year in which she has struggled to speak, Giffords recited the pledge with the audience, head held high and a smile on her face as she punched each word.

The remembrance at the University of Arizona capped off a day of events, including a church service that drew hundreds in the afternoon and a citywide bell-ringing at 10:11 a.m., the exact time a gunman started shooting at a Safeway political event.

With hugs and tears, southern Arizonans remembered the dead, the shattered lives and those who acted heroically after a gunman opened fire at an outdoor meet-and-greet that severely wounded Giffords and killed six.