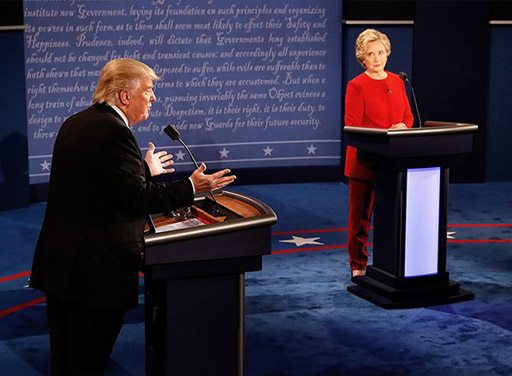 Thoughts on the first presidential debate between Democrat Hillary Clinton and Republican Donald Trump, which pretty much went like this:

• First, Clinton was decided the winner of the debate almost universally. Both CNN and PPP‘s separate polls taken after the event showed Clinton with a decisive win for the night.

• Most pundits believe Trump stayed on balance for the first 20-25 minutes, and then his defensive nature kicked in and he became “the Donald” we all expected to show up. It became difficult for him to resist interrupting Clinton on almost every answer, while Clinton wisely stood silent during his own responses.

“You’re wrong, you’re wrong.” Trump had a lot to say on #DebateNight, a lot of it while Clinton was speaking https://t.co/sEiZcCSoPV pic.twitter.com/KymeaXfBqC

• According to Facebook, the “top social moment” of the debate was when Trump said his strongest asset is his “temperament.” The comment was met by laughs in the debate hall and snarky replies on social media.

• Twitter exploded when Trump denied ever saying that global warming was a hoax “created by and for the Chinese.” Instantly, the Twitterverse retweeted his 2012 tweet which stated exactly that.

• Often, Trump’s own ad-libs contributed to his own detriment. When Clinton brought up Trump saying the 2008 Wall Street collapse and the job losses that followed would be good for his investments, Trump replied, “That’s called business by the way.” When the former secretary of state stated that Trump is dangerous for off-hand threats like saying he would blow Iranians out of the water for taunting U.S. sailors, Trump replied, “That would not start a war.” It all became a bit like a petulant 10 year old.

And then there was this during a question about Trump’s refusal to release his tax returns:

Clinton: For 40 years, everyone running for president has released their tax returns. You can go and see nearly, I think, 39, 40 years of our tax returns, but everyone has done it. We know the IRS has made clear there is no prohibition on releasing it when you’re under audit.

Third, we don’t know all of his business dealings, but we have been told through investigative reporting that he owes about $650 million to Wall Street and foreign banks. Or maybe he doesn’t want the American people, all of you watching tonight, to know that he’s paid nothing in federal taxes, because the only years that anybody’s ever seen were a couple of yearswhen he had to turn them over to state authorities when he was trying to get a casino license, and they showed he didn’t pay any federal income tax

Trump: That makes me smart.

Clinton: So if he’s paid zero, that means zero for troops, zero for vets, zero for schools or health. And I think probably he’s not all that enthusiastic about having the rest of our country see what the real reasons are, because it must be something really important, even terrible, that he’s trying to hide.

So, what does that make the rest of the country’s tax payers who DO pay for military, veteran’s care, roads and bridges and school? Are we chumps? I think that comment was a strong example of some of the self-inflicted wounds Trump suffered throughout the debate.

• Most pundits point to an exchange about a comment Trump had made about Clinton not looking “presidential.” Trump attempted to pivot to saying he spoke about her “stamina” (he’s actually commented on both). But Hillary stayed on topic, recalling many of the comments Trump has made about women over the years, including a story about a former Miss Universe that Trump took to calling “Miss Piggy” and “Miss Housekeeping.”

Trump called in to Fox and Friends this morning to tell his side of the “Miss Universe” story. “I know that person. That person was a Miss Universe person. And she was the worst we ever had, the worst, the absolute worst, she was impossible,” he said. “She gained a massive amount of weight, and it was a real problem. We had a real problem. Not only that, her attitude.”

• Super-stats guy Nate Silver believes that Clinton will see something of a small bounce coming out of this first head=to-head encounter.