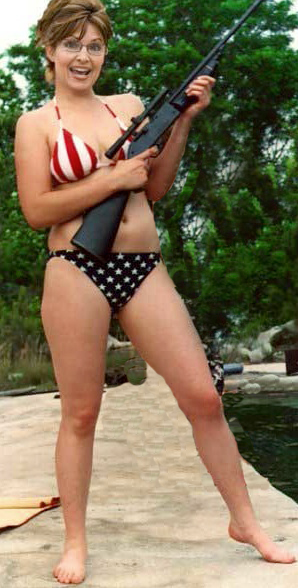 “Extra’s” Mario Lopez sat down for a chat with former half-term Alaska Governor Sarah Palin about her upcoming reality show, “Amazing America with Sarah Palin,” which her team hopes runs longer than her first try at the genre.

Palin talks about many things, including whether or not she might run for president in 2016.

Not that anyone has asked her to run, mind you.

On running for president: “You know I don’t have a crystal ball. I don’t know what I’m going to do politically, but certainly want to inspire people to be involved, debate and be competitive in order to make this country better and allow all of us equal opportunity. I want to help people who can be in positions to enact some policies.”

On the news of Katie Couric’s talk show being cancelled: “Do you believe in karma? I certainly believe that what goes around comes around… I remember getting a couple of texts that said things like, ‘Oh sorry that it didn’t work out there at CBS or ABC…’ The ratings were going in the tank with her as one of the head honchos there in the newsroom at CBS and then it didn’t surprise me, her other move. Things weren’t going real well there, either.”

You might recall that Palin’s first reality show, Sarah Palin’s Alaska, was cancelled after airing only 8 episodes.