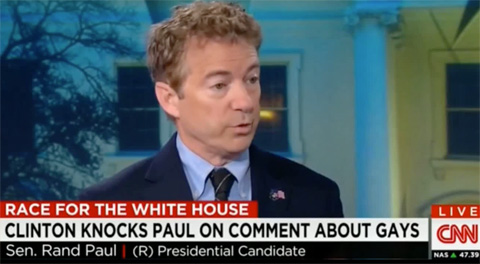 Struggling GOP White House hopeful Rand Paul was recently asked if LGBTs should have the right to sue employers who fired them for being gay.

Paul responded to a group of Drake University students saying that the federal government shouldn’t be in the business of protecting LGBT employees from being fired because “there are plenty of other places that will hire you.”

“I think, really, the things you do in your house, just leave those in your house and they wouldn’t have to be a part of the workplace, to tell you the truth,” he said.

CNN’s Wolf Blitzer asked him about the remarks last night. Paul stated more than once that he doesn’t think a person should be fired for being gay, but didn’t change much else from his original comment:

So, basically, Paul says “don’t be gay at work if you don’t want to be fired for being gay?”

I still don’t know what he means. Does he mean you shouldn’t wear a wedding ring at work if you’re gay? Is he referring to be too “stylish?” Flamboyant? Does he also have boundaries for the straight folks to follow?