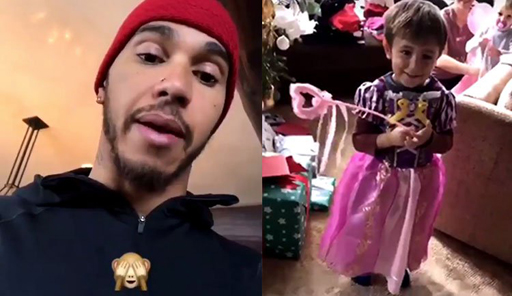 Formula One race car driver Lewis Hamilton stepped in it on Christmas Day when he shamed his nephew for wearing a princess dress.

On a video posted to his Instagram story for his 5.7 million followers, he yelled at the 4-year-old for playing in a princess dress happily waving a wand.

When his nephew tells him he’s wearing one because he likes them, Hamilton yells at him.

Folks of the Twitterverse were not having his “toxic masculinity” issues:

Go stick your toxic masculinity up your arse.

Lewis Hamilton likes to shout in the faces of kids to make them feel uncomfortable when they express themselves differently.

Straight into the wood chipper he goes.pic.twitter.com/TMNzCnuWoh

Hamilton has since deleted the video and issued this apology:

Yesterday I was playing around with my nephew and realised that my words were inappropriate so I removed the post. I meant no harm and did not mean to offend anyone at all. I love that my nephew feels free to express himself as we all should.

My deepest apologies for my behaviour as I realise it is really not acceptable for anyone, no matter where you are from, to marginalise or stereotype anyone.— Lewis Hamilton (@LewisHamilton) December 26, 2017

I have always been in support of anyone living their life exactly how they wish and I hope I can be forgiven for this lapse in judgement.