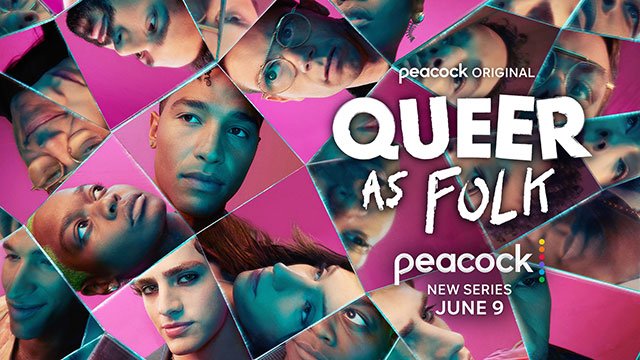 Peacock has dropped the new trailer for its upcoming reboot of Queer As Folk, and it is defiant, sexy, bold, resilient, vibrant, punk, wild, messy, blazing, ecstatic, loving, angry, joyful, and queer as possible.

Peacock’s new iteration of the LGBTQ-centric show is a vibrant reimagining of the groundbreaking British series created by Russell T. Davies, exploring a diverse group of friends in New Orleans whose lives are transformed in the aftermath of a tragedy reminiscent of the 2016 Pulse Nightclub shooting in Orlando.

Best line from the trailer:  “The best way to get over someone is by getting under someone else.”

Russell T. Davies, who created the original British version of Queer As Folk in 1999, which consisted of 8 episodes, had this to say about the new edition:

“I’m very proud of what we achieved in 1999, but in queer years, that was a millennium ago! As a community, we’ve radicalized, explored, opened up, and found new worlds – with new enemies and new allies – and there was so much to be said.

“Stephen pitched a brand new version of Queer as Folk with so much imagination, insight, and crucially, joy, that I simply couldn’t resist. I thought it was about time the title belonged to a whole new generation. The 2022 show is more diverse, more wild, more free, more angry – everything a queer show should be.”

The first U.S. version of the show aired on Showtime for five seasons between 2000 and 2005.

Seventeen years later, a new generation will get to experience Queer As Folk during what is a very different time for LGBTQ+ folks in the U.S. and around the world.

The new Queer As Folk premieres on Peacock June 9.