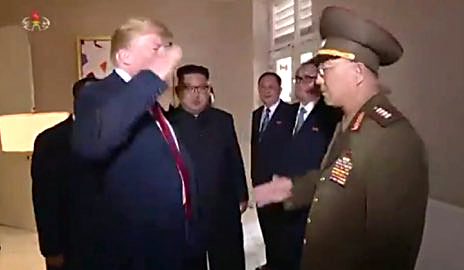 Remember when the Obama detractors lost their shit when President Obama bowed to foreign dignitaries?

Now this from Daily Kos:

You’d think it would be a no-brainer not to salute a general from a foreign military, one that has been threatening nuclear war with the United States for decades. But, not Trump.

And now North Korean state-run television is running this video on repeat. Donald Trump saluting their general, giving him the ultimate legitimacy. What kind of message does that send to the North Koreans who’ve been living under the threat of starvation and firing squads at the hands of this very same general?

A look back at some of the right-wing hysteria over Obama bowing: pic.twitter.com/g45TPBeTJ8

This comes at almost the same time that Trump defended Kim Jong Un in an interview with Fox News’ Bret Baier:

This salute is now being used as propaganda in North Korea.

What would Truman and MacArthur say about this?

Do we need to make a note?

“Do not salute the enemy” pic.twitter.com/wVpjJVJkZI