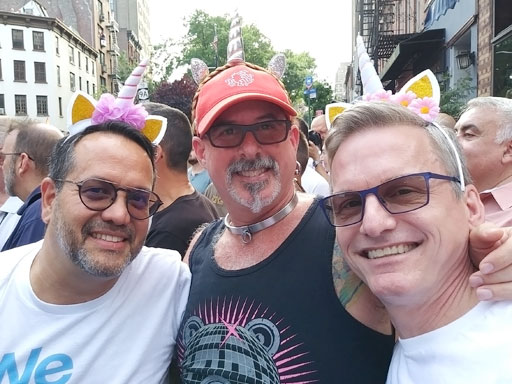 Steps away from “where pride began,” World Pride hosted the “Stonewall 50 Commemoration Rally” before an audience filling both Christopher and Grove Streets to capacity around Sheridan Square.

Marking the first night of the Stonewall Uprising, it was a historic event in World Pride’s impressive spectrum of attractions for visitors gathered from around the world as one to celebrate Community.

Starting off the proceeding with a true international flare was Fogo Azul, an all-woman Brazilian samba reggae drumline entering before the crowd in attendance quickly turning the summer night into a hot street dance.

New York City Mayor, Bill de Blasio welcomed Pride visitors to the city and paid tribute to the Stonewall veterans who were the reason for the evenings gathering. Along with current Stonewall Inn owner, Stacy Lentz, the Mayor called those who rose up fifty years ago to the stage presenting them with a Mayoral proclamation declaring, June 28, 2019 as “Stonewall Day.”

Drag trio Stephanie’s Child took to the stage for a performance and served as mistresses of ceremonies for the night welcoming a roster of LGBT+ notables who have gotten the Community to today and continue to fight for equality, civil rights and justice throughout the world.

Notable among the speakers was Barbara Poma, owner of Pulse nightclub and founder of onePULSE Foundation.

Poma give a stirring speech recounting her son’s journey of coming out as a gay man and losing him to AIDS when he was only 28 years old. Through her son she learned the importance of “safe spaces” for LGBT+ people like nightclubs where they can gather and be themselves.

In spite of the horrific tragedy of mass murder, hate crime at her own ‘safe space,’ Poma noted how the conversation about the safety of Black and Brown LGBTs has been elevated and needs to continue as they are disproportionately affected by hate crimes.

Considering all the people of color present when police raided the Stonewall Inn, maybe we haven’t come as far we’d like to be believe.

More photos from the event.