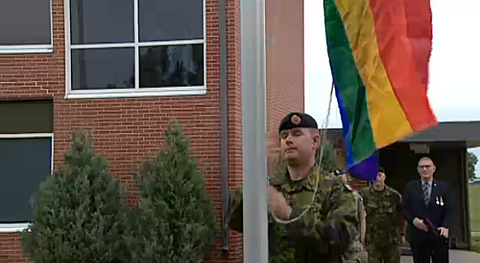 The Canadian Press
reports the rainbow flag, a symbol for gay, lesbian, bisexual and transgendered
people, is to be flown at CFB Edmonton for a week to coincide with the
city’s Pride festival.

“This is a huge turnaround from what used to be,” he told CP. “When I first joined, I would never even consider telling anyone that I was gay. It just wasn’t macho.

“To be at the stage now where it is not only recognized and accepted
and tolerated, but the base commander of the one of the largest bases of
Canada is willing to have that flag put up, it is just an amazing
feeling.”