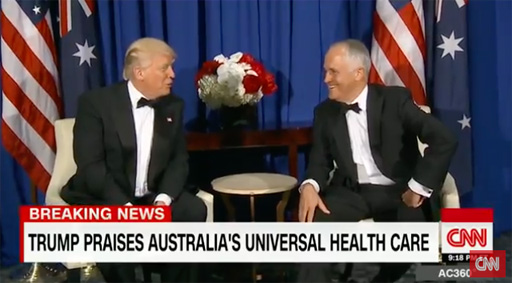 Last night, during a press conference with Australian Prime Minister Malcolm Turnbull, President Trump praised Australia’s healthcare system saying, “I shouldn’t say this to our great gentleman and my friend from Australia because you have better health care than we do.”

Perhaps it was a slip of the tongue since Australia has a nationalized, single-payer system that covers all of it’s citizens.

Trump: Australia has better health care than U.S. (they have universal health care)

Watch the reaction from @BernieSanders to @chrislhayes pic.twitter.com/zYF8NsGKF0