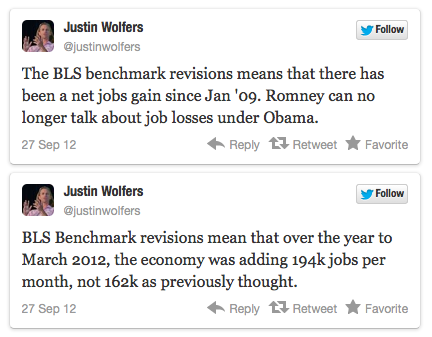 According to new revisions released today by the Bureau of Labor Statistics, the economy created 386,000 more jobs
between March 2011 and March 2012 than shown by previous estimates.

As
economist Justin Wolfers noted, this means that President Obama is now net positive for job creation over his term in office, even taking into account the massive losses in January 2009:

The new numbers — which are based off of unemployment insurance reports
that employers submit to the federal government — show that 453,000
more private sector jobs were created than shown by previous estimates,
meaning Obama’s net private sector job creation total is now 868,000.
Government jobs, meanwhile, shrank by an additional 67,000.