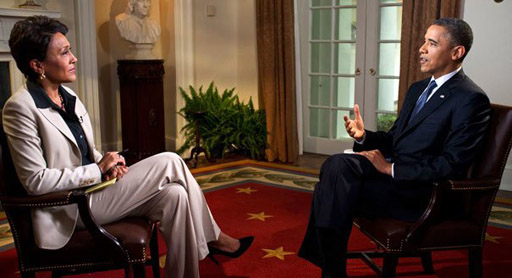 President Obama today announced that he now supports same-sex marriage, reversing his longstanding opposition amid growing pressure from the Democratic base and even his own vice president.

OBAMA: I have to tell you that over the course of several years as I have talked to friends and family and neighbors when I think about members of my own staff who are in incredibly committed monogamous relationships, same-sex relationships, who are raising kids together, when I think about those soldiers or airmen or marines or sailors who are out there fighting on my behalf and yet feel constrained, even now that Don’t Ask Don’t Tell is gone, because they are not able to commit themselves in a marriage, at a certain point I’ve just concluded that for me personally it is important for me to go ahead and affirm that I think same sex couples should be able to get married.

His endorsement comes less than a week after Vice President Joe Biden embraced the issue during an appearance on Meet The Press and a day after North Carolina banned marriage equality and civil unions in its state constitution.

Obama’s remarks today bring him full circle to his position in 1996, when he was running for the Illinois state Senate. In response to a questionnaire from Chicago’s Outlines gay newspaper, he proclaimed, “I favor legalizing same-sex marriages, and would fight efforts to prohibit such marriages.”
(via ThinkProgress)