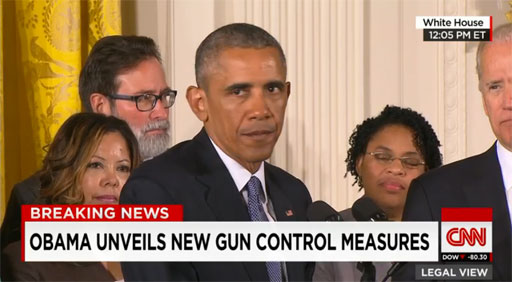 The president had this to say at the presser:

“And although it is my strong belief that for us to get our complete arm around the problem Congress needs to act, what I asked my team to do is to see what more we could do to strengthen our enforcement” to curb illegal gun sales, Obama said in brief remarks to reporters after the meeting. “And the good news is, is that these are not only recommendations that are well within my legal authority and the executive branch, but they’re also ones that the overwhelming majority of the American people, including gun owners, support and believe in.”

Here’s a simple breakdown of what Obama is doing. You can read a full list of detail here.

1. Keep guns out of the wrong hands through background checks.
Currently, some gun sellers get around having to do background checks by selling online or at gun shows. The executive orders will ensure that If you’re in the business of selling firearms, you must get a license and conduct background checks.

Additionally, the Bureau of Alcohol, Tobacco, Firearms and Explosives (ATF) is finalizing a rule to require background checks for violent criminals trying to buy some of the most dangerous weapons and other items through a trust, corporation, or other legal entity. Closing this loophole will help folks from dodging a background check. (That doesn’t sound like a bad thing, now, does it?)

2. Make our communities safer from gun violence.
The President’s FY2017 budget will include funding for 200 new ATF agents and investigators to help enforce our gun laws that are currently on the books.
ATF is finalizing a rule to ensure that dealers who ship firearms notify law enforcement if their guns are lost or stolen in transit. (Gee, that makes good sense, doesn’t it?)

3. Increase mental health treatment and reporting to the background check system.
The Department of Health and Human Services is finalizing a rule to remove unnecessary legal barriers preventing States from reporting relevant information about people prohibited from possessing a gun for specific mental health reasons.

4. Shape the future of gun safety technology.
The President has directed the Departments of Defense, Justice, and Homeland Security to conduct or sponsor research into gun safety technology. If we can create a child-proof aspirin bottle, surely we can come up with a gun that kids can’t accidentally kill themselves with.

On “Fox News Sunday,” former Gov. Jeb Bush of Florida said Mr. Obama’s “first impulse is always to take rights away from law-abiding citizens.” Donald Trump told CBS’s “Face the Nation,” “I don’t like anything having to do with changing our Second Amendment.” Gov. Chris Christie of New Jersey, also on “Fox News Sunday,” dismissed the orders as “illegal” and called Mr. Obama, among other things, a “petulant child,” a “king” and a “dictator.”

That could not be further from the truth. The reason for the wailing is not about these executive orders. The gun nuts mostly don’t even know what’s being proposed. And the ones who do are acting out because they say “it’s a  slippery slope” and that any rational set of common sense actions will lead to the government taking guns away from law-abiding gun owners, WHICH has never been proposed.

Before anyone goes and whines about the 2nd Amendment being trampled on, go read the actual executive orders. Nothing here but closing loopholes and spending more money enforcing what’s already on the books.

Watch part of the announcement below: