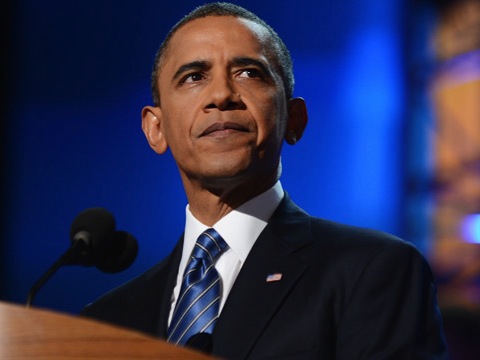 Earlier this week, President Obama spoke at a Democratic LGBT Fundraiser in New York City where he announced the news that he will be signing an executive order aimed at federal contractors and banning discrimination on the basis of sexual orientation or gender identity.

Via the Los Angeles Times:

After taking the stage at the Democratic National Committee fundraiser, Obama had to wait for at least a minute for the shouting to die down before he could start speaking. A few minutes later, he delivered in person the news his team made public earlier in the week: that he has ordered them to draft an executive order aimed at federal contractors and banning discrimination on the basis of sexual orientation or gender identity.

If some lesbian, gay, bisexual or transgender Democrats had been dismayed with the president for his long wait before issuing the order, they were over it Tuesday. “Sometimes you guys were a little impatient,” Obama joked. “Sometimes I had to say, ‘Will you just settle down for a second?'”

From the President’s speech via White House press release:

This is a country where no matter who you are, or what you look like, or how you came up, or what your last name is, or who you love — if you work hard and you take responsibility, you should be able to make it.

That’s the story of America. That’s the story of this movement: People who stand up and come out and march, and organize, and fight to expand the rights we enjoy and extend them to other people — people who work against the odds to build a nation in which nobody is a second-class citizen, everybody is free to be who they are; and that you’re judged based on are you kind and competent and work hard, and treat each other with respect, and are a team player and look after your community, and care and love and cherish your kids.

That’s how we’re supposed to be judged. That’s the fight that brought all of us here today. That’s what made it possible for me to stand up here as your President. It’s what gave many people in this room the freedom to live their lives freely. It’s what should inspire us to keep working to make sure all our children grow up in an America where differences are respected and even celebrated, and where love is love.