As he did in his first year in the Oval Office, President Joe Biden has issued a presidential proclamation recognizing June 2022 as Lesbian, Gay, Bisexual, Transgender, Queer, and Intersex Pride Month.

During Pride Month, we honor the resilience of LGBTQI+ people who are fighting to live authentically and freely. We reaffirm that LGBTQI+ rights are human rights. And we recommit to delivering protections, safety, and equality so everyone can realize the full promise of America.

During Lesbian, Gay, Bisexual, Transgender, Queer, and Intersex (LGBTQI+) Pride Month, we reflect on the progress we have made as a Nation in the fight for justice, inclusion, and equality while reaffirming our commitment to do more to support LGBTQI+ rights at home and abroad.

I often say that America can be defined by one word: possibilities. This month, we celebrate generations of LGBTQI+ people who have fought to make the possibilities of our Nation real for every American.

Today, the rights of LGBTQI+ Americans are under relentless attack. Members of the LGBTQI+ community — especially people of color and trans people — continue to face discrimination and cruel, persistent efforts to undermine their human rights.

An onslaught of dangerous anti-LGBTQI+ legislation has been introduced and passed in States across the country, targeting transgender children and their parents and interfering with their access to health care. These unconscionable attacks have left countless LGBTQI+ families in fear and pain.

All of this compounded has been especially difficult on LGBTQI+ youth, 45 percent of whom seriously considered attempting suicide in the last year — a devastating reality that our Nation must work urgently to address.

This month, we remind the LGBTQI+ community that they are loved and cherished. My Administration sees you for who you are — deserving of dignity, respect, and support.

As I said in my State of the Union Address — especially to our younger transgender Americans — I will always have your back as your President so that you can be yourself and reach your God-given potential.

Today and every day, my Administration stands with every LGBTQI+ American in the ongoing struggle against intolerance, discrimination, and injustice.

We condemn the dangerous State laws and bills that target LGBTQI+ youth. And we remain steadfast in our commitment to helping LGBTQI+ people in America and around the world live free from violence.

Since my first day in office, I have taken historic action to ensure that everyone — no matter who they are or whom they love — has an equal place in our democracy.

I signed a landmark Executive Order charging the Federal Government with preventing and combating discrimination on the basis of sexual orientation and gender identity. This includes non‑discrimination protections for LGBTQI+ Americans in housing, health care, education, employment, credit and lending services, and the criminal justice system.

My Administration has expanded access to inclusive passports for transgender Americans and instituted reforms to the traveler screening process at United States airports. We are supporting the open service for patriotic transgender military members and providing better services for LGBTQI+ veterans.

I am honored by the service of the first openly gay Cabinet Secretary and the first transgender person confirmed by the Senate and to have been able to establish the first White House Gender Policy Council.

But there is more work to be done. That is why I continue to call on the Congress to pass the Equality Act, which will enshrine long overdue civil rights protections and build a better future for all LGBTQI+ Americans. We must also fight for LGBTQI+ seniors so that they can age with dignity. And we must confront the disproportionate levels of poverty, homelessness, and unemployment in the LGBTQI+ community.

This month, we honor the resilience of LGBTQI+ people, who are fighting to live authentically and freely. We reaffirm our belief that LGBTQI+ rights are human rights. And we recommit to delivering protections, safety, and equality to LGBTQI+ families so that everyone can realize the full promise of America.

NOW, THEREFORE, I, JOSEPH R. BIDEN JR., President of the United States of America, by virtue of the authority vested in me by the Constitution and the laws of the United States, do hereby proclaim June 2022 as Lesbian, Gay, Bisexual, Transgender, Queer, and Intersex Pride Month.

I call upon the people of the United States to recognize the achievements of the LGBTQI+ community, to celebrate the great diversity of the American people, and to wave their flags of pride high.

IN WITNESS WHEREOF, I have hereunto set my hand this thirty-first day of May, in the year of our Lord two thousand twenty-two, and of the Independence of the United States of America the two hundred and forty-sixth. 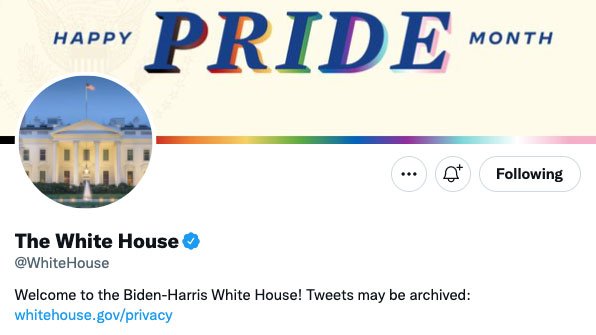