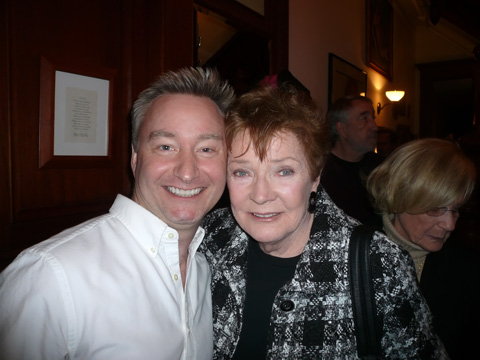 Polly Bergen, star of stage and screen, has passed away at the age of 84 in her Connecticut home.

The Emmy Award-winning, Tony Award-nominated actress, singer and business woman became a household name by the time she was in her 20s. In 1953, she made her Broadway debut, by 1957 she had her own TV series, and in the 1960s she moved into the world of film roles.

Bergen won an Emmy in 1958 portraying the tragic singer Helen Morgan on the famed anthology series “Playhouse 90.” She was nominated for another Emmy in 1989 for best supporting actress in a miniseries or special for “War and Remembrance.”

In recent years, she played Felicity Huffman’s mother on “Desperate Housewives” and the past mistress of Tony Soprano’s late father on “The Sopranos.”

When she was refused an audition for the 2001 Broadway revival of “Follies,” she contacted composer Stephen Sondheim. He auditioned her and gave her the role of a faded star who sings of her ups and downs in show business. The show-stopping song, “I’m Still Here,” was reminiscent of Bergen’s own saga. She was nominated for a Tony award for her role.

In 2002 she played a secondary role in the revival of “Cabaret” and the following year she was back on Broadway with the comedy “Six Dance Lessons in Six Weeks.”

I have a very personal connection to Polly. Halfway through the run of the 2001 revival of FOLLIES, I was cast as a replacement. My experience with that cast and crew – who became family – was remarkable, especially in terms of depth of talent, commitment and warmth.

It’s not always easy to jump into the middle of a Broadway run. You haven’t made the connections and relationships that get forged in weeks of grueling rehearsals. But I was welcomed with open arms by everyone. Everyone. And in particular, Polly.

Polly’s performance of “I’m Still Here” brought the house down every night. Near the end of the first act, I was done with my duties onstage until Act Two. I would make my way under the stage and the audience, through the basement, to stand in the back of the house at the Belasco Theatre at least 6 or 7 out of 8 performances a week to marvel at her power, art and passion. I have never seen such a reaction from a Broadway audience. Polly would finish and the applause would come. After several seconds, she would make her way upstage right to exit. Most nights, just as she would reach the edge of the stage, the applause would surge again. It was thrilling.

We closed that production on Broadway on July 14, 2001. It was my birthday. A birthday I shared with Polly.

A few years ago, upon the passing of our cast mate Betty Garrett, a 10th anniversary reunion was held for us all. The night was filled with smiles and comfortable friendships. Among many others, it was a treat to see and catch up with Polly that night. We laughed, we reminisced, and we remembered how lucky we all had been to come together as a family, if even for such a short time. You can find my post about that magnificent night here.

On this occasion, I require you all to watch Polly’s performance of her show-stopping “I’m Still Here” from FOLLIES at the 2001 Tony Awards (she was nominated for her powerhouse performance, of course). I would be remiss to not include this here.

There is a bootleg version on YouTube of Polly’s full performance of the song here. I know some theatre folks frown on the bootleg thing, but on days like this, I love that I can watch and revel in Polly Bergen’s magnificent talent again.

Although she may have left us for now, she is forever and always “still here.”