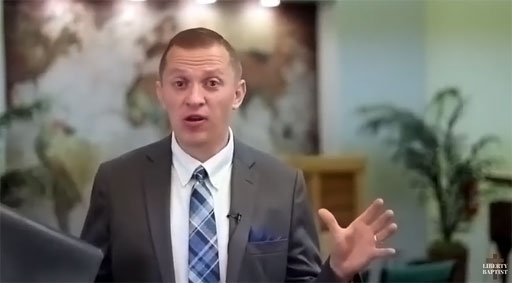 A group of virulently anti-LGBTQ pastors are planning a “Make America Straight Again” conference over three days in Orlando, Florida, this weekend.

The Friendly Atheist reports event will occur just days after the 3rd anniversary of the deadly Pulse Nightclub shooting in the city. Organizers specifically say they chose the dates because Orlando’s Pride celebration is this weekend.

The list of participants is a veritable who’s who of ‘Christian’ haters including:

• Orlando-based Patrick Boyle, who says in the video below they plan to speak out against the “sodomites and their filth that they’ve been spreading.”

• Steven Anderson, who celebrated the mass shooting at Pulse because there were “50 less pedophiles in this world.”

• Roger Jimenez, who said the worst thing about the Pulse massacre is the shooter “didn’t finish the job.”

• Tommy McMurtry, who wishes everyone could go back to a time when society put LGBTQ folks in their place – “six feet under.”

• Bruce Mejia, who says LGBTQ stands for “Let God Burn Them Quickly” and believes gays should be “put to death.”

Here’s their announcement video. You’ve never seen such chipper hate in your life.

WFTV, the ABC News affiliate in Orlando, reports the group contacted the local Sheriff’s office asking to hire deputies to handle security duties at the conference. The Sheriff’s Office refused the request.

“The fact that the timing of this conference coincides with the three-year anniversary of the Pulse Nightclub shooting in nearby Orlando did not go unnoticed by our staff,” a spokesman told WFTV. “We felt as though the timing of the conference is in poor taste.”

Boyle told the news station they were surprised by the rejection saying “We were actually just asking for police presence just to deter any kind of violence.”

That response is surprising since McMurtry recently told his congregation that he hopes gay folks protest and that it gets violent because “they have ‘Stand Your Ground’ in Florida, so we’re allowed to fight back – so, I say ‘bring it!’”