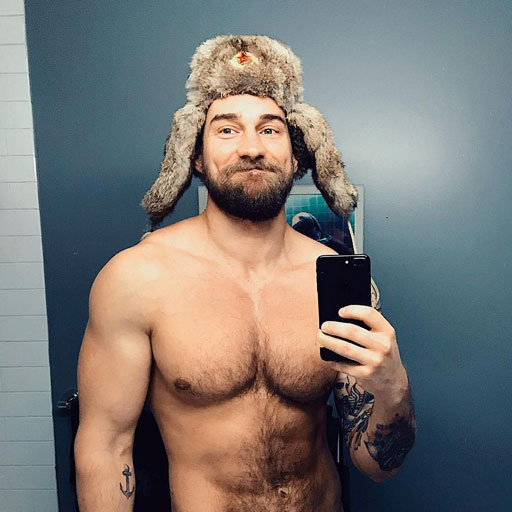 Russian artist and producer Alexander Abramov lives his life out and proud on his Instagram account where over 300,000 people (including me!) follow him each day for a look at his woofy, furry goodness in action.

The hunky Russian has kept personal journals for more than 18 years and has drawn upon those memories to create Uncovered.

“My diary is about awareness of my homosexuality, about my experiences and explorations of the world: first feelings, first love, first sexual encounter,” says Abramov. “It’s also about human imperfection and struggle, drugs and fears, scars and past troubles.”

“On the whole, it tells of becoming the man I have wanted to be: a man who is able to inspire others to make changes for the better,” he adds. 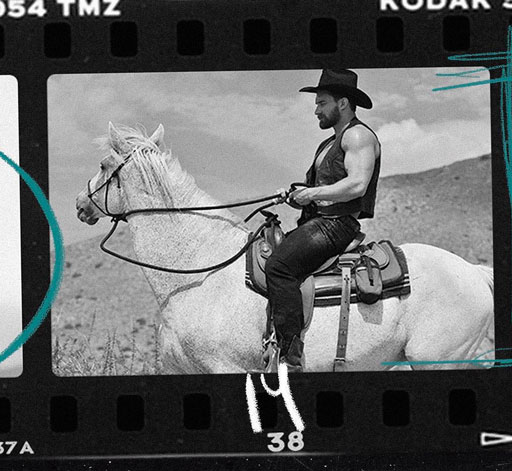 A little background on Alex: he began his career in the media business as an assistant in a PR agency in Kazakhstan. He moved to Moscow in his early 20s where he worked as a producer of photo projects.

He also dabbled in fashion design creating collections that appeared on the runways of Russian Fashion Week.

Life eventually led to working in TV as an executive producer of a popular makeover reality series where he remained for five years before moving to the U.S.

“It’s been a long, winding road to where I am now but all of my past experiences in magazines, fashion and TV have contributed enormously to the making of this series,” says Alex. “They are all a part of the fabric of the man that I’m excited to reveal in ‘Uncovered.’”

I had the opportunity to chat with handsome Alex for my podcast, The Randy Report. Here’s a few takeaways from my chat:

Alex knows some folks just want to see him in the buff, and he’s ok with that.

“Some people wanted to see me naked,” says Alex. “Okay, people, see me naked. But only in the way I want to represent myself. I actually don’t have any issues with being naked. It was part of marketing and the story, to sell this book. Because, let’s be realistic – some part of people will buy this book because they want to know me better through my journal notes; some part of people will buy just because they want to see me naked. And I’m cool with this.”

What you see is what you get with Alex. How he appears today, how he chose the characters for Uncovered. This is all an extension of Alex.

Press materials reveal that he was somewhat sickly as a child. And at 6’2” and 130 pounds, he was skinny with health problems. Eventually, he found his way to a gym as a young adult. But not necessarily to improve his health. It was to get a man. The kind of man he liked.

“I was always attracted to, kind of like, muscle, big guys. I had lovers and I had experience when I was skinny, but it wasn’t exactly what I wanted. So, I start going the gym because I want to change my body to become more attractive to a type of guys who I really like.”

And that’s also how he chose the five characters in Uncovered. Each volume is named for the characters he portrays (Wrangler, Mercenary, Woodsman, Journeyman and Seafarer) and all represent masculine, sexual archetypes Alex has been drawn to all his life.

“It’s all about my, let’s call it, sexual fantasy,” says Abramov. “I was always into men. Like – men, men, men. You know, soldiers, cowboys, lumberjacks. It should be look like men and smell like men. It should wear clothes like men. I’m totally cool with different types in our LGBTQ community. All these different things. But my personal preference was always about men.”

If you’d like to hear Alex (and his charming Russian accent) talk about his journey to Uncovered, hit the play button below for the full podcast. We end up talking about a range of things including a bit of politics (I’m talking to a real Russian and I’m not gonna bring up “collusion???”).

In that he was born in the Republic of Kazakhstan and  lived his young adult life in Russia, Alex knows well the lack of LGBT rights in these countries.

For those reasons, he is donating 10% of proceeds of Uncovered to The Russian LGBT Networkwhich promotes equal rights and respect for human dignity, regardless of sexual orientation and gender identity.

👨🏻💭 [ First image like a first step ] HI guys, today I finally can introduce you to my very #personal #project titled: ‘UNCOVERED’. 1️⃣0️⃣ months in the making, 1️⃣0️⃣0️⃣➕ hours of photo shoots at multiple locations 🏞🌄🌅, more then 5️⃣0️⃣0️⃣0️⃣ pictures taken 📸🙌🏻 by my good friend and hugely talented #photographer Dima Bocharov | @dmitrybocharov | comes 5️⃣ #artbooks 5️⃣ different #characters and only 1️⃣ story – My Story – the story of a man who wasn’t afraid #speakup, follow thru with his #vision and be #uncovered, both #body and #soul. 👨🏻👉🏻🔛 Put your profile #notifications #ON, every day I’ll post more information and images 🐻💪🏻 #photography #imnotafraid #cowboy #cowboyhat #bodyandsoul #introduction #monday #mondaymotivation #dmitrybocharov #storyofmylife #beardman #betruetoyourself #betrue #mirrormirroronthewall #eyesisthewindowofthesoul
A post shared by Alexander Abramov (@abramov_lex) on Mar 26, 2018 at 7:50am PDT

🐻💭 day 3 of our first shoot last #summer with @dmitrybocharov [ 5:30 am at Joshua Tree National Park ] 💭😌🙌🏻Me completely #naked in #boots and a #Stetson with a #rifle on my shoulders. 🧐🤪💭Now I’m trying to remember what I was even thinking about, but I can not. 😝😬 Totally sleep deprived, but yet in the #moment. 🐻🙌🏻 What I do remember it’s how I was feeling. 😈👊🏻 “#Wild” – a word which will explain to you guys my mindset that #morning. 🐺An #animal. 🐺A #hunter. Alone in the middle of nowhere amongst the #wildlife and sounds of the #desert waking up to the #newday. 🇺🇸🌅🙌🏻 The picture doesn’t show you now all #beauty around me in this #July morning in the east #Southern #California, but I #promise, the pictures in the book, will… #photography #imnotafraid #cowboy #cowboyhat #bodyandsoul #introduction #dmitrybocharov #storyofmylife #artbook #wrangler #uncovered
A post shared by Alexander Abramov (@abramov_lex) on Mar 26, 2018 at 6:08pm PDT