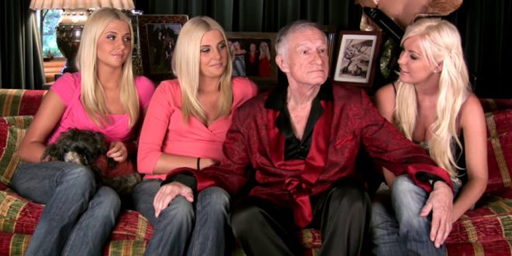 The founder of Playboy Magazine, Hugh Hefner, died at his Playboy Mansion in West Los Angeles at the age of 91.

More than a magazine, Hefner was an advocate and hero of the sexual revolution.


The media mogul’s influence went far beyond publishing — he created the sexual revolution nearly single-handedly (with some help from the advent of the birth control pill and the rise of feminism).

After starting the status quo-shattering Playboy magazine in 1953, Hefner went on to launch TV and film companies, finance documentaries, and preside over the Hollywood social scene from his bubbling Jacuzzi at the mansion, a frequent location for industry events. The mansion, which had became somewhat run-down, was sold in 2016, but the terms of the sale specified that he was allowed to live there until his death.

He is survived by his wife, Crystal, and four grown children: Christie, who served as CEO of Playboy Enterprise for more than 20 years, David, Marston, and Cooper, who currently serves as Chief Creative Officer at the company.

Hefner was a longtime supporter of causes including First Amendment rights; he donated money toward the restoration of the Hollywood sign and to USC’s film school, and at times supported the Democratic Party. He formed the Playboy Foundation in 1965 to fight censorship and support research into sexuality.