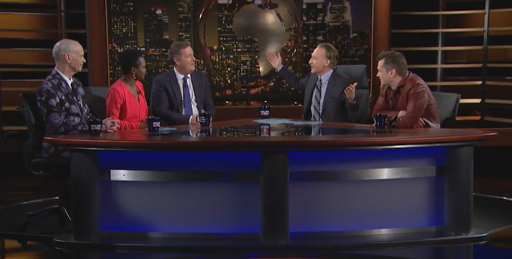 I loved this on last night’s Real Time with Bill Maher – Piers Morgan being told to fuck off after defending Donald Trump.

Bill Maher began by asking for an apology from all those folks who said “Hillary as lesser of two evils” now that we see the hot cup of crazy we have in the White House now.

After comedian Jim Jeffries told Morgan he was sucking up to Trump just because he won The Celebrity Apprentice and enjoys having a famous friend, Morgan called Jeffries ridiculous, unpleasant, and “losing his audience.”

Check how the audience reacts when Jeffries asks the audience for their opinion. Here’s a hint: not so great for Morgan.

In truth, most Americans had no idea who Piers Morgan was until his run on Celebrity Apprentice. He owes a lot of his U.S. fame to the Donald. No wonder he’s so “loyal.”