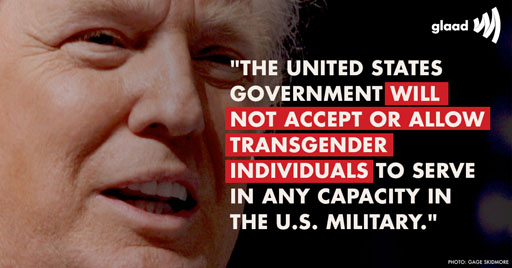 A federal judge has denied the Trump administration’s request to bar transgender folks from enlisting in the U.S. military which means the Pentagon will have to allow trans recruits beginning January 1.

U.S. District Judge Colleen Kollar-Kotelly ruled against overturning her ruling, delivered back in October, that trans people should be able to enlist at the start of the year, despite an ongoing legal battle.

Kollar-Kotelly was one of two federal judges to rule against the ban, the most recent of which also prohibits the federal government from refusing to cover health costs associated with gender confirmation surgery.

On the same day as the second ruling against them, the Trump administration asked for clarification on Kollar-Kotelly’s ruling. Was she really saying they couldn’t delay trans soldiers from enlisting while the legal battle raged on, and while the Defense Department reviews the issue? Why, yes. Yes she was.

Even that wasn’t enough for them, however. They tried one last time to block trans people, filing for an emergency stay against Kollar-Kotelly’s ruling.

Today’s ruling means the military has no choice but to begin allowing trans people to join the military, but doing so won’t be easy.

As the Associated Press reports, “the Pentagon can disqualify potential recruits with gender dysphoria, a history of medical treatments associated with gender transition and those who underwent reconstruction. But such recruits are allowed in if a medical provider certifies they’ve been clinically stable in the preferred sex for 18 months and are free of significant distress or impairment in social, occupational or other important areas.”

Individuals on hormone therapy will have to be stable on their medication for 18 months.