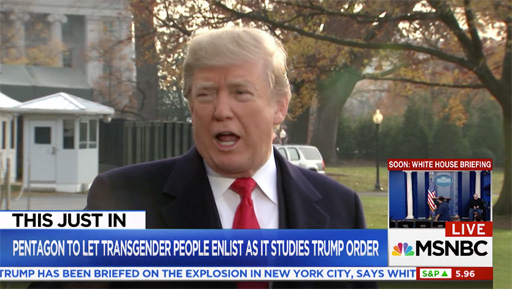 NBC News reports on a Pentagon memo which outlines in great detail how transgender individuals will be processed into the military using their “preferred” gender versus their identified sex at birth.

A Department of Defense memo dated December 8, 2017, explains that if an applicant’s preferred gender is different than their birth sex, they may present a birth certificate, court order or passport indicating their preferred sex and will be processed into the military under that gender.

Room assignments, height and weight standards, medical exams, underwear requirements, and bathroom assignments will be determined based on the “preferred” gender, even when the individual retains “the anatomical characteristics of their birth sex,” the memo says.

The memo details in great specificity how transgender individuals will operate in the military, including directing that transgender male applicants who have not undergone hormone therapy or surgical changes will wear undergarments “consistent with their physical anatomy” and will be administered pregnancy tests like female applicants undergoing in-processing.

Both male and female applicants who have undergone sex reassignment surgery or genital reconstruction will be disqualified from joining the military unless they have been physically and emotionally stable for at least 18 months.

Applicants may request privacy during the group screening procedures and have chaperones based on preferred gender, not birth sex. In fact, once processed, the only record of a discrepancy between birth sex and preferred gender is a medical history form, DD 2807, maintaining an applicant’s privacy.

“Every applicant will be treated with dignity and respect,” the memo says.

While the Trump White House says it has not exhausted all legal options, the Pentagon has issued a statement saying it will obey recent court orders knocking down the Trump ban.

Transgender individuals will be allowed to enlist beginning January 1, 2018.