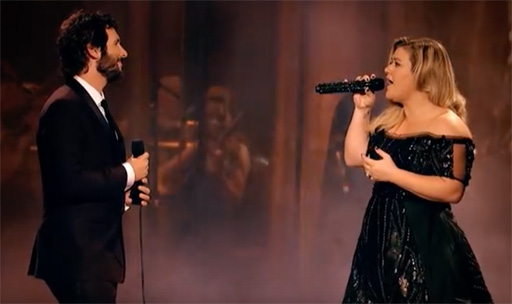 From his upcoming PBS special based on his current album exploring the Broadway songbook, Josh Groban and guest Kelly Clarkson sing “All I Ask of You” from Andrew Lloyd Weber’s The Phantom Of The Opera.

I have it good authority that Groban was urged to do a Broadway/standards album for years by members of his team but the pseudo-opera singer resisted, instead recording much of the lack-luster pop/crossover material he’s released in recent years, much of that self-penned.

I’ve been a fan of his earlier recordings, but in the past year or so his voice seems a bit “tight” to me and he seems to lack the vocal prowess he once had. If you watched this year’s Tony Awards, you know what I mean.

I don’t know if he changed coaches or regimen, but it is noticeable. Additionally, he continues his annoying habit of singing with his eyes closed, which has bothered me for years.

That said, I so like several tracks on the Broadway album. Given the right material, there’s no denying Groban can be a talented vocalist. You can check it out on iTunes here.

The PBS special will air throughout December.