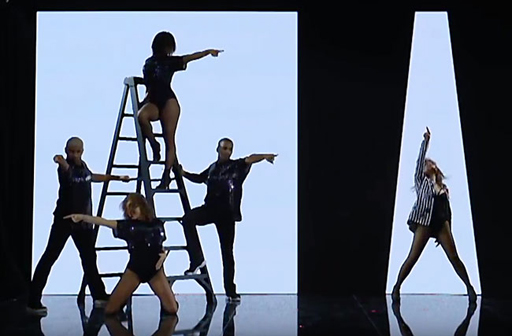 Paula Abdul dropped by The Late Late Show with James Corden this week to promote her upcoming Straight Up Paula! tour – her first in more than 25 years.

And along the way, she delivered a smoking hot performance of her classic hit, “Straight Up,” with stunning choreography.

The former American Idol judge also shared her not-so-smooth journey to become an L.A. Lakers cheerleader at the age of 18 before beginning her award-winning music career.

As Miss Paula tells it, at the beginning of the tryouts, she was called forward with a group of ladies (before dancing a step) and was told “We’re thinning the herd – you’re the first cut.”

But it seems she anticipated a few obstacles at the try-outs, so she had planned ahead and brought a whole bag of clothes with her.

Abdul headed for the ladies room – not to cry, but to change her outfit. She went back into the auditions, changed her name and made to the dancing round.

And got cut again.

Back to the ladies room and another costume change. This time she listed herself as “P.J. Apple.”

It was 5-6-7-8 dance, and the future Grammy/Emmy Award winner made the squad.

Within a year, she would become the head choreographer for the team.

And then, of course, she was famously discovered by The Jacksons; she became one of the premier music video choreographers at the height of music video popularity; signed her own recording deal with Virgin Records, and the rest is history.

Her debut album, Forever Your Girl, sold 7 million copies and yielded 4 ‘straight up’ number one singles.

Glad to see Abdul is back. Its clear she’s still hitting it like a champ. There are younger artists out there who wish they could dance this well.

Watch her knock “Straight Up” right out of the park in the video below.

You can find info about her tour here.