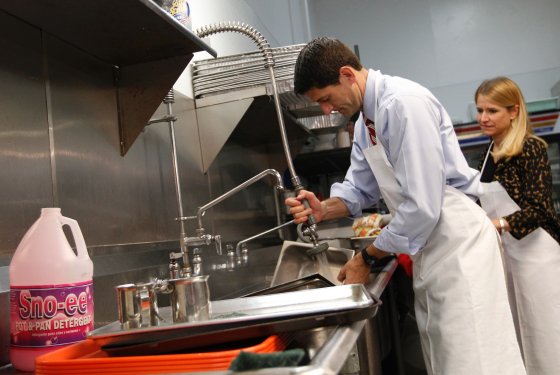 Making the rounds today is this pic taken at staged photo-op with Paul Ryan at a soup kitchen in Youngstown, OH.

Apparently the idea was for Ryan and family to “help out” at a local soup kitchen, but upon arriving found that the morning meal service had been completed and the volunteers had cleaned up already.

Ryan stood at the sink and took some large metal pans that did not appear to be dirty, soaped them up and rinsed them, remarking as the cameras clicked and the TV cameras rolled that he had spent a summer washing dishes when he was younger.

That Paul Ryan – he cares so much for the homeless he really wanted to make doubly sure those pans were clean. What a guy.