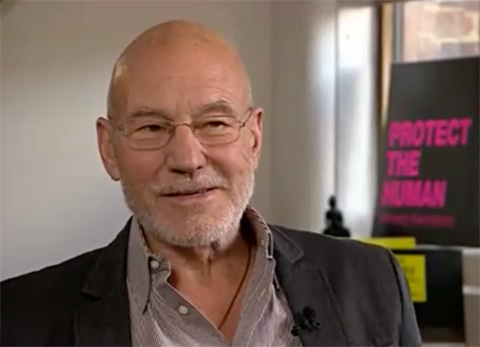 We’re all aware of the issues involving those in the wedding industry who refuse to provide services for same-sex weddings here in the US.

And similar issues have arisen abroad. For instance, in Northern Ireland, Ashers Bakery found itself on the losing end of a lawsuit for refusing to make a cake with the words “support gay marriage” above a picture of Bert and Ernie from Sesame Street. The incident sparked widespread debate.

Talking on Newsnight last night, Star Trek & X-Men star Patrick Stewart was asked about the incident and he responded like this:

“Finally, I found myself on the side of the bakers.

“It was the actual words on the cake they objected to. Because they found the words offensive. I would support their rights to say ‘no, this is personally offensive to my beliefs, I will not do it.'”

UPDATE: Patrick Stewart just posted this to his Facebook page. I’m guessing he got some push-back.

As part of my advocacy for Amnesty International, I gave an interview on a number of subjects related to human rights, civil rights and freedom of speech. During the interview, I was asked about the Irish bakers who refused to put a message on a cake which supported marriage equality, because of their beliefs. In my view, this particular matter was not about discrimination, but rather personal freedoms and what constitutes them, including the freedom to object. Both equality and freedom of speech are fundamental rights— and this case underscores how we need to ensure one isn’t compromised in the pursuit of the other. I know many disagree with my sentiments, including the courts. I respect and understand their position, especially in this important climate where the tides of prejudices and inequality are (thankfully) turning. What I cannot respect is that some have conflated my position on this single matter to assume I’m anti-equality or that I share the personal beliefs of the bakers. Nothing, absolutely nothing, could be further from the truth. I have long championed the rights of the LGBT community, because equality should not only be, as the people of Ireland powerfully showed the world, universally embraced, but treasured.