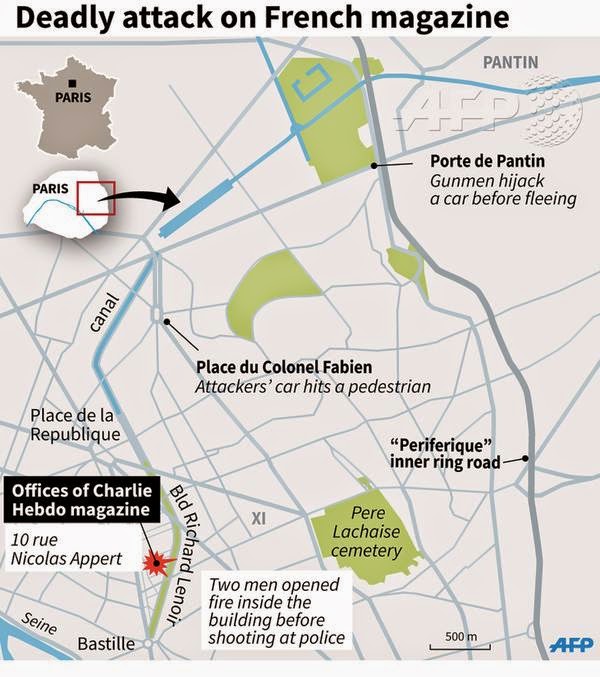 In what has been described as a terrorist act, 12 people are confirmed dead plus five more injured after three gunmen attacked the offices of satirical magazine Charlie Hebdo in Paris.

Four of the magazine’s well-known cartoonists, including its editor-in-chief, were among those killed, as well as two police officers.

A major police operation is under way to find three gunmen who fled by car.

President Francois Hollande said there was no doubt it had been a terrorist attack “of exceptional barbarity”.

The masked attackers opened fire with assault rifles in the office and exchanged shots with police in the street outside before escaping by car.

They later abandoned the car in Rue de Meaux, northern Paris. Witnesses said they heard the gunmen shouting “we have avenged the Prophet Muhammad”.

I strongly condemn the horrific shooting at the offices of Charlie Hebdo magazine in Paris that has reportedly killed 12 people. Our thoughts and prayers are with the victims of this terrorist attack and the people of France at this difficult time.

France is America’s oldest ally, and has stood shoulder to shoulder with the United States in the fight against terrorists who threaten our shared security and the world.

Time and again, the French people have stood up for the universal values that generations of our people have defended. France, and the great city of Paris where this outrageous attack took place, offer the world a timeless example that will endure well beyond the hateful vision of these killers.

We are in touch with French officials and I have directed my Administration to provide any assistance needed to help bring these terrorists to justice.