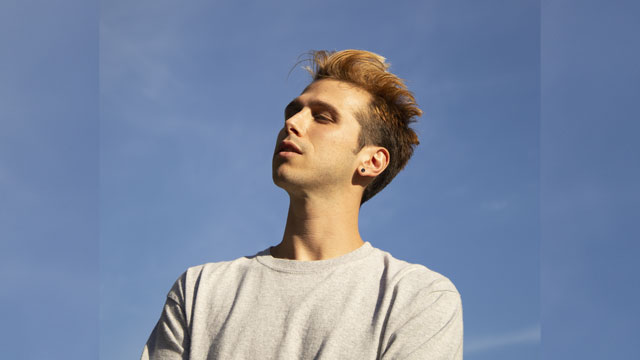 The gentle, stirring vocals by alex land right in the sweet spot as he explores how he got from ‘there’ to ‘here’ as a gay man. And the plaintive and achingly honest lyrics amid a spare but artful musical arrangement allows the storytelling to take centerstage.

The track feels authentic and specific, yet at the same time universal.

I’m pretty sure you can count on this being on my list of Top 5 Songs of 2021 come December.

I had a chance to chat with alex recently about how he found the DNA of “Confrontations,” his inspirations, and more. Hit play and then check out our chat below.

The Randy Report: What was the inspiration behind “Confrontations?”

alex: I wrote “Confrontations” about growing up closeted and having to differentiate between which parts of me are authentic and which parts I created in order to keep my secret when I was younger. In an attempt to stay closeted, I not only hid parts of me, but I pretended to like certain things and act a certain way.

I’ve come to learn that this is an all-too-common experience for LGBT+ people. “Confrontations” is a raw look at sorting through different parts of yourself as you search for the most authentic version of yourself.

TRR: Which came first – the music or the words?

alex: The idea for this song has been in my head for a while, and one day it finally poured out of me. It’s a difficult experience to articulate so I didn’t want to force it. As a songwriter, I write as many songs as I possibly can. One day, I sat down at my piano and started playing some chords. The words followed shortly after.

It’s something I’ve been trying to put into words for so long, and I knew I needed to stay focused and pursue the idea as it came out.

At first, I didn’t plan on showing “Confrontations” to anyone. It’s such an intimate, personal story and I was pretty scared to share it. I posted a short clip of a demo of “Confrontations” on TikTok, and to my surprise, hundreds of thousands of people relate to this feeling. Thousands of messages of similar experiences began to flood in and I couldn’t be happier that I decided to share it because it’s connecting with so many people.

TRR: You’ve spoken on Instagram about having been ’super-closeted’ and ‘making up parts about yourself.’ Can you share some of that?

alex: Growing up, I had a really hard time acknowledging that I was different from the other guys I went to school with. I didn’t even let myself look at these parts of me. I think I hid many authentic parts of myself and pretended to be someone I wasn’t to shield myself from getting hurt and bullied.

One big thing I’ve learned from all of the stories people have shared with me online is: we’ve made a lot of progress, but much of the closeted experience remains the same. It wasn’t until after I came out that I began sorting through different parts of me, which I think many LGBT+ people can relate to — walking, talking, and acting a certain way to be seen as less “different” or less of an “easy target.” I think it’s a daily practice of returning back to your authenticity at all costs.

You can’t put a price on true happiness, and I know that the happiest I’ve ever been is right now: I am the most myself I have ever been.

TRR: When did you know that you wanted to become a singer?

alex: My first CD was Britney Spears’ debut album. I’ve known since then that I wanted to make people connect to themselves and to one another through music. This, however, was one of the passions I hid away in order to seem more “masculine.”

I went to college for Marketing & Communication to be “practical,” but during college, I earned money by singing on the streets of Boston. It went really well, which pushed me to move to Los Angeles to pursue a career as a music maker. I frequently remind myself of how proud my younger self would be right now if he could see me living out his dream.

TRR: Who has had the biggest influence on your music and why?

alex: Britney and the Backstreet Boys were my first exposure to pop music, so I’m forever grateful for them. In terms of some more modern musicians, I’m incredibly inspired by Lauv and Russ – they can write, produce, and perform their own songs – and their songs are the soundtrack to millions of peoples’ lives.

There’s something about an artist that can get in a room alone and churn out magic that is so powerful – it really inspires me. I wrote, produced, performed, and mixed “Confrontations.”

TRR: Who (if anyone) would you love to collaborate with?

alex: Lauv and Russ are dream collaborations of mine!

alex: I’d have to say… my dog, laughter, and making songs. Making something from nothing is the closest thing to magic that I’ve experienced and I’m so grateful to be able to make songs.

alex: “What if it can turn out better than you ever imagined?” I heard Russ say this in an interview and it really resonates with me.

alex: This is my favorite question 🙂 her name is Sunny. She’s my best friend.

While we’re here, check out his impressive debut release “Unconditional” below. The track was named Songwriter Universe’s “Best Song of the Month” in August 2021.

alex wrote the song last February during the pandemic as he realized the many people and things in his life he’s grateful for.