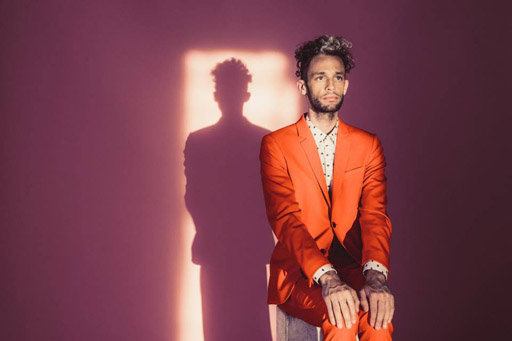 Out singer/songwriter Wrabel drops the official video for his new single “11 Blocks.”

Currently on tour with multi-platinum artists Gavin DeGraw and Andy Grammer, Wrabel is riding the strength of his single “11 Blocks,” as it powers its way to Top 10 at Hot AC radio and was added to iHeart Radio’s prestigious On The Verge program.

NYLON magazine says Wrabel is “stocked with the soulfulness of a Sia or Sam Smith, and a melodic pop DNA that throws back to icons like Paul Simon…”

Wrabel first made a splash on the world stage in 2014 with his debut single, “Ten Feet Tall”. Grammy Award®-winning DJ and producer Afrojack reached out to Wrabel to record his own version of “Ten Feet Tall” which was featured during Super Bowl XLVIII on a Bud Light commercial. The VEVO video for “Ten Feet Tall” has more than 65 million views to date.

Speaking to iHeartRadio, Wrabel shared that the song is not only personal to him, but actually straight out of his own life.

“It’s a very literal story, which is frightening. I wrote it about the first person I fell in love with moved 11 blocks away from me in California. In New York everyone is 11 blocks away. I’m there [in NY] a lot and I kind of notice. You have a subway, or whatever. But LA is so spread out. I find myself taking the really weird long route to Whole Foods just to kind of be like, ‘Are you there?’ And so it just felt way too close. And I don’t drive because I think cars are scary, people are scary, and then there’s engines. So I’m walking a lot and I count, it’s literally 11 blocks. And I drew the little map, which is now tattooed to my arm. It’s a real song about a real person, two real people, and that’s really weird. I keep saying weird. It’s just bizarre to me because the night it came out I called my manager and I was like, ‘I kind of want to call Mr. iTunes and be like, ‘Can you take it down actually? Like I’ve made a big mistake.’ It’s too much. The map. I traced it off Google Maps. It’s so dark.”

Adding to the personal expression of this public release, Wrabel posted this to his Facebook this weekend:

tonite i quite literally set the past on fire.

ready to move on.

ready to leave for this tour and ready to share these songs and these stories and my head and my heart with whoever will listen.

hehe this is a bit dramatic.

but sometimes it just has to be.

I really like this. I hope you do, too.

I’ve previously written about out singer/songwriter Wrabel when he dropped his remix of “I Want You.”