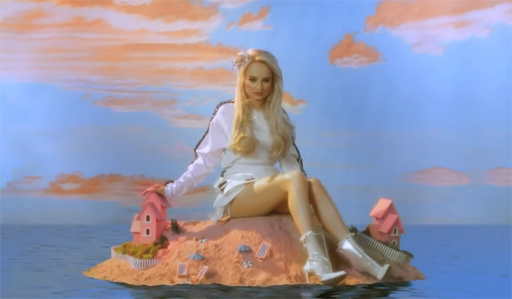 Check out the music video for out trans popster Kim Petras’ debut single, “I Don’t Want It At All,” a pop-y “shop-til-you-drop” anthem that features a special guest appearance by Paris Hilton.

Since her childhood in Cologne, Germany, Kim has been in love with pop music. It was a window into the bigger world outside of her little town. Kim notably began transitioning with female hormone therapy following her twelfth birthday before making worldwide headlines as the youngest person to receive gender reassignment surgery at the age of 16. Her experiences and bravery are subtly present in her music and her undeniable debut single perfectly showcases her imaginative artistry and unique brand of escapism.

“Pop was always my biggest obsession,” Kim affirms. “I spend so much time looking for new music online. As a kid, music videos were my escape from the little town I was living in, because nothing happened there. I want to provide that kind of escapism. It’s unapologetically pop.”

Great to see the release was noticed by big mainstream sites Ew.com and Idolator.