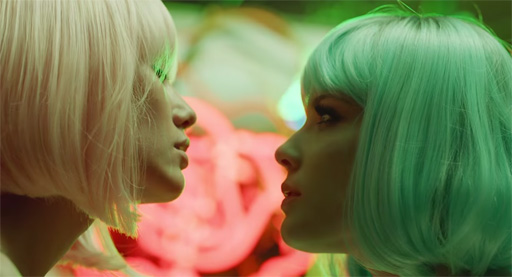 I’ve known openly bisexual Halsey’s music for some time but realized today I’ve never shared any on The Randy Report.

Her electronic indie pop reminds me of a darker, more rebellious Ellie Goudling; think Pink – but on a thoughtful, electro-pop landscape.

I figure her music video for “Ghost” (over 29 million views) is a good place to start.

Shannon Keating at Buzzfeed recently wrote about out women in music, and included Halsey in the piece:

Her music video for “Ghost”, released in June 2015, is set in a dreamy but alienating Japan, its aesthetics lifted right out of Lost in Translation. Halsey, in a short blue wig, rolls around on a bed with a woman played by model Courtney McCullough, who wears the same wig in pink. They’re captured in their underwear, in slo-mo, sometimes kissing but mostly just touching each other’s bare expanses of skin.

The woman Halsey’s paired with, played by McCullough, doesn’t quite stand alone as her own person — she functions more as Halsey’s racebent mirror. The neon-lit, futuristic Tokyo setting seems distant, touristic, even otherworldly.

You can check out her song “Castle,” from the film The Hunstman: Winter’s War here.