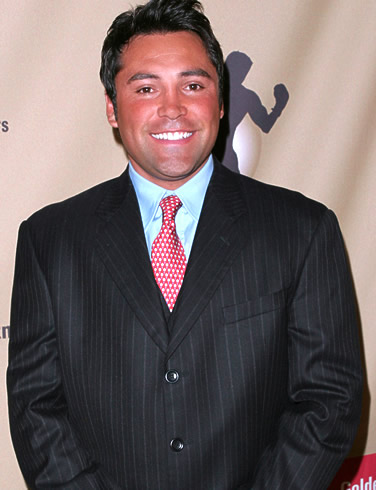 If the fishnet fits, you must admit. Turns out those sexy pictures of boxing legend Oscar De La Hoya wearing sassy lingerie were real after all. The Golden Boy finally admitted as much in an interview with Aqui y Ahora (Here and Now), a news show on Univision. When the pictures leaked in 2007, De La Hoya told everyone that they were fake, but he’s owning up after all these years.
“Let me to tell you, yes, yes, it was me [in those pictures],” he told Aqui y Ahora. “I am tired now of lying, of lying to the public and of lying to myself.” The pictures, if you want to remember De La Hoya for something other than his devastating left hook, showed the boxer in bras, fishnet stockings, short skirts and women’s underwear.
So why did De La Hoya, a proud, manly Mexican fighter, wear women’s underwear and put on a pouty face? He says it was a combination of cocaine and alcohol. That’s apparently over with now though, because De La Hoya has been sober since May.