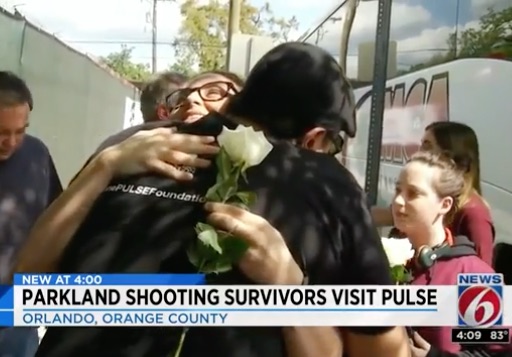 After spending several days in Tallahassee, Florida, lobbying state lawmakers to take steps that could stop violent gun massacres in the future, students who survived the gun massacre at a Parkland high school two weeks ago made a stop in Orlando to meet with survivors of the Pulse Nightclub shooting in 2016.

Neema Bahrami, who was an event manager at Pulse at the time of the attack, told the press, “We’re all family.”

Watch the local news report below.

Joined Pulse survivors to welcome students and families from Stoneman Douglas to the Pulse site. We share their grief and support their efforts to ensure no other community has to experience what Orlando and Parkland have. pic.twitter.com/JsoouUup4A