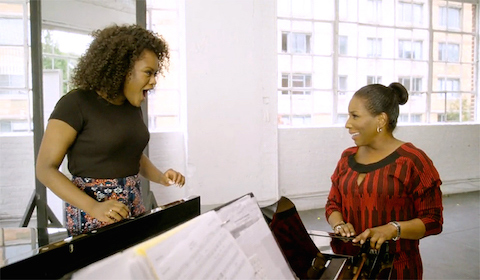 Even though the cast is knee-deep in the middle of rehearsals for the upcoming December 3rd broadcast of The Wiz Live!, Entertainment Weekly got a chance to capture a moment between two “Dorothies” – Shanice Williams, who portrays the young girl from Kansas in the upcoming holiday special, and Stephanie Mills, Broadway’s original “Dorothy,” who takes on the role of “Auntie Em.”

Mills had this to say about her WIZ co-star: “Shanice has all the innocence and purity that Dorothy should have. She’s 19 years old and she’s just wonderful in that role. I’m glad she’s basically an unknown, because she’s not tainted by anything; she’s pure.”