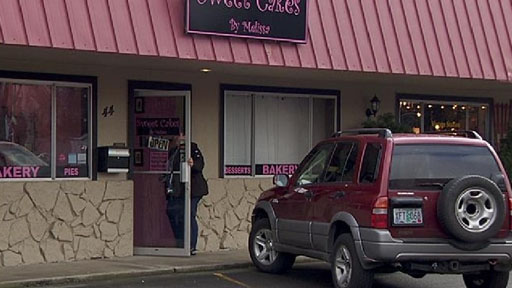 The anti-gay owners of the Oregon bakery, Sweet Cakes by Melissa, have finally paid the $136,927 fine levied against the business for refusing to bake a wedding cake for a same-sex wedding.

Aaron and Melissa Klein, the owners of Sweet Cakes by Melissa, refused to bake a cake for Rachel and Laurel Bowman-Cryer, saying it would infringe on their religious beliefs.

“This case is not about a wedding cake or a marriage. It is about a business’s refusal to serve someone because of their sexual orientation. Under Oregon law, that is illegal,” the bureau’s final order states.

After several months of refusing to pay the damages, Aaron Klein delivered the check (with accrued interest) to the State of Oregon’s Bureau of Labor and Industries offices in Portland on Monday.

While the far right-wing zealots tried to make the case about same-sex marriage, the business was actually fined for discriminating due to sexual orientation, which has been illegal in the state for years.

It’s also worth noting that a Christian crowd-funding campaign raised over $500K for the couple, so the issue actually became a money-making episode.

The state will hold onto the funds until the full appeals process is exhausted.