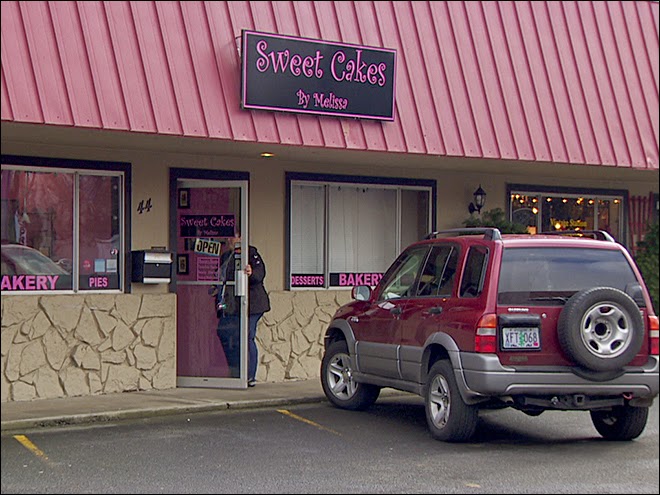 By now, we all know the story of the Oregon bakery, Sweet Cakes by Melissa, which in January 2013 refused to make a wedding cake for a lesbian couple.

The bakery owner, Aaron Klein, refused to make the cake when he realized the cake would be eaten at a same-sex wedding.

The couple filed a discrimination complaint with the Oregon Bureau of Labor and Industries on the basis of sexual orientation. Under Oregon state law, you can’t refuse service to someone because they are gay.

A judge has now weighed in on the matter. And the bakery, not surprisingly, has been found guilty of – yes – discrimination.

The ruling via press release:

The Interim Order finds that the undisputed material facts support charges of unlawful discrimination under the Oregon Equality Act. An administrative hearing scheduled for March will focus on damages for the same-sex couple.

Under Oregon law, Oregonians may not be denied service based on sexual orientation or gender identity. The law provides an exemption for religious organizations and schools, but does not allow private businesses to discriminate based on sexual orientation, just as they cannot legally deny service based on race, sex, age, disability or religion. The bakery is not a religious institution under law.

The Kleins argued against a connection between the same-sex couple’s sexual orientation and respondents’ alleged discriminatory action. The BOLI Interim Order rejects the argument:

As the Agency argues in support of its cross-motion, “[t]here is simply no reason to distinguish between services for a wedding ceremony between two persons of the same sex and the sexual orientation of that couple. The conduct, a marriage ceremony, is inextricably linked to a person’s sexual orientation.”

On March 10th, the court will rule on what damages the bakery may owe the couple.

It should be noted that the bakery’s website pointedly makes this notation:

We here at Sweet Cakes strongly believe that when a man and woman come together to be joined as one, it is truly one of the most special days of their lives, we feel truely honored when we are chosen to do the cake for your special day.