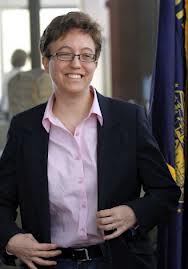 The Democratic majority in Oregon’s House of Representatives is set to name openly gay state Rep. Tina Kotek as their new leader tonight.

Openly gay leaders will control legislative chambers in five states, according to the AP, up from two before the election last week. Senator Ed Murray, who is openly gay, was elected majority leader in neighboring Washington this week, while Rep. Mark Ferrandino was elected Colorado House speaker.

“We all look for people out there who look like us,” she said.

“I have had emails and text messages from people who are very excited,” Kotek said. “I think any time you have a ‘first’ it’s an important thing for the community.”

Denis Dison from Victory Fund, the national organization that backs LGBT candidates, said Kotek and her peers are just the latest example of LGBT Americans’ inclusion in the legislative system.

“For many years we were building a bench of openly gay officials who could step into those roles, and now we’re seeing that around the country,” he said.