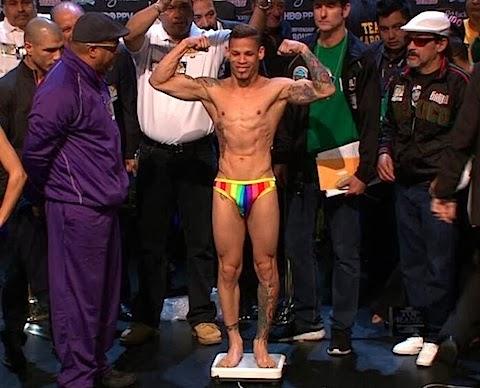 Orlando Cruz, who clearly pulls no punchs, made a statement as he weighed in for the bout wearing rainbow briefs and will wear rainbow trunks during the fight. Speaking to the Guardian about tonight’s featherweight world title match, Cruz had this to say:

Cruz understands how this fight will smudge the boundaries between the personal and professional. He even implies that Salido, as a Mexican, might be troubled by facing a gay fighter.

“My coming out made it harder for him. He will have it in his mind that he’s fighting a homosexual for the world title.” Is he suggesting Salido might be homophobic? “He’s professional with me but Mexicans often have something homophobic in them. It’s the machismo culture. He won’t want to lose to a gay man.

“Salido will be much more aggressive. He will want to make a statement because I’m gay. But he’ll fall into the trap by being macho. I’ll let him come at me, and I’ll show him then. The only language I will use is spoken by my fists. They will do my talking.”