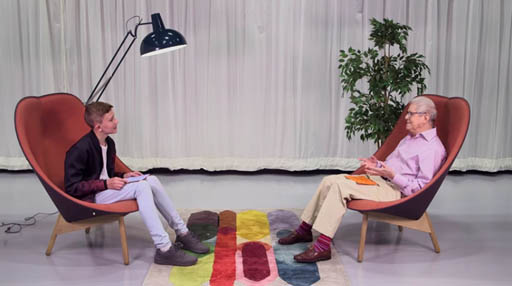 Made in collaboration with London Pride and BBC2 with their new documentary ‘Against The Law’ which will be released at the end of July.

This “chat across the ages” features openly gay 13 year-old Louis and openly gay 78 year-old Percy who have a chat about the differences 50 years have made on gay culture and acceptance.

Louis shares that he has a boyfriend and enjoys across the board support from his peers and family. Impressed, Percy tells him, “I think you’re so lucky the world has changed and you can just be yourself.”

As this year marks the 50th anniversary of the decriminalization of homosexuality in England and Wales, Percy shares what it was like to be gay at time when it was illegal.

Louis, taken aback, says, “It amazes me how they could even just say for loving someone, you’re being arrested. That completely shocks me.”

At the end of the chat, Louis asks for wisdom for future LGBTs, to which Percy shares, “Stand up for being gay, and for actually trying to make people understand that the most important thing is that you can love somebody and it doesn’t matter who they are. Love is love.”