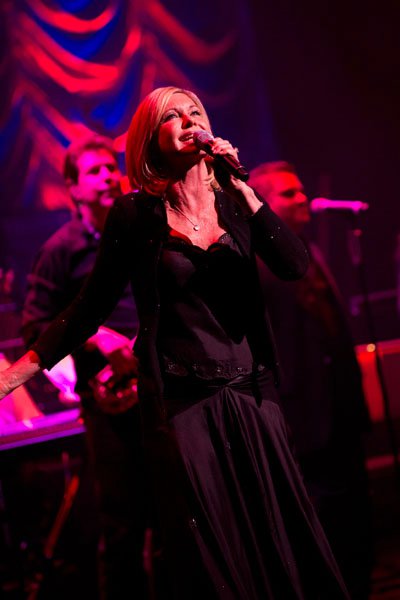 From Aussietheatre.com: “Welcomed by standing ovations which continued throughout the 90 minute show, the first thing you realise about this dynamic woman who has publicly battled cancer, been a guest on Glee and worn a spandex leotard in public and lived to tell the tale, she has stamina. Any artist who can get an entire crowd on their feet, getting “physical” should be applauded and Newton-John was evidently appreciated. “

“Even the most cynical of audience members was bound to have left the theatre humming the songs and swept up in the star power. Although not quite cabaret (even if you do throw in quick rendition of ‘Somewhere Over the Rainbow’), Olivia Newton John was certainly a headlining class act.”

From The Australian: “A sparklingly in-form Olivia Newton-John sent her audience into raptures at the opening weekend of the 11th Adelaide Cabaret Festival. The event’s headline performer made her long-awaited homecoming to Australia after an extended period overseas in a show of uplifting spirit, energy and generosity.”

“Looking trim and sprite in a sequined black outfit, she showed that she was thoroughly recharged and her voice is as fresh as ever. Her youthfully high range remains intact, her rhythmic timing is impeccable and she crosses styles from rock and pop to country with alacrity.”

“But it was Newton-John’s inclusion of newer songs on themes of personal survival that made the performance special. Grace and Gratitude from 2006 and the tender Help Me To Heal, revealed a woman of great stamina, optimism and heart. It was transfixing, and proved how our Olivia continues to shine as bright as ever as one of Australia’s most indelible musical jewels.”

From smh.com.au: “Newton-John’s concert may have been more country, pop and rock than cabaret but it hardly mattered given the outpouring of love in the room. “

“Essentially a collection of popular songs, including Suddenly and Let Me Be There, and such enduring hits as Xanadu and a suitably pumped-up Physical, the show was a reminder of how multi-faceted and evergreen a career it has been. “

“Remarkably, Newtown-John retains the girl-next-door sweetness that helped make her a star and the resilience, faith and grace that only comes with age. The performance concluded with her signature tune I Honestly Love You penned by Peter Allen. But this was no pat ending. Beautifully arranged and sung, it was genuinely touching and sounded better than ever. On this celebratory night we may have been revelling in nostalgia but everyone was on their feet and having a ball.”

From AdelaideNow.com: “Last night the Australian singing superstar showed us she’s still the one we want. The evergreen export who’s taken Australia to the world brought her world back to Adelaide in a stunning concert at the Festival Theatre.”

“Looking slinky and sensational in a shimmering black outfit, Newton-John won the crowd over with the things that have made her a special performer: a beautiful voice, a natural personality and a massive heart that reached out to everyone lucky enough to be there. “

“Starting with standards like Little More Love and Sam, she revealed all the qualities that have made her a star of undiminished glow.”

“One of the many highlights was a song called Heal Me, an anthem to the many people facing the challenge of cancer and to help raise awareness for her wellbeing centre in Melbourne.”

“Newton-John then unleashed a collection of her classic up-tempo numbers that set pulses racing and showed she knows how to rock with the best of them.”

“Clad in a leather jacket and pants, David Campbell joined Newton-John in a raunchy rendition of You’re the One that I Want. She then sang Totally Devoted to You and ended the night with her signature tune I Honestly Love You.”